KG on playing center: 'I don't like it'
10yChris Forsberg
Tatum wants 'some rules' around All-NBA voting
NBA
29mTim Bontemps
NBA playoffs 2022: Complete conference finals matchups, schedules and news
6h
Why the Celtics-Heat series is so ugly -- and so good
6hHanif Abdurraqib
Celtics-Heat: The biggest questions that could decide Celtics-Heat Game 5
Boston Celtics
7hZach Lowe
Jimmy Butler and the Miami Heat need help to get back to the NBA Finals
2dBrian Windhorst
Celtics, fueled by 'urgency,' rout Heat to tie series
2dTim Bontemps
Heat calm despite drubbing: 'Proven we can do it'
2dNick Friedell
Celtics torch Heat early, even series with 102-82 blowout
2d
Mar 3, 2012 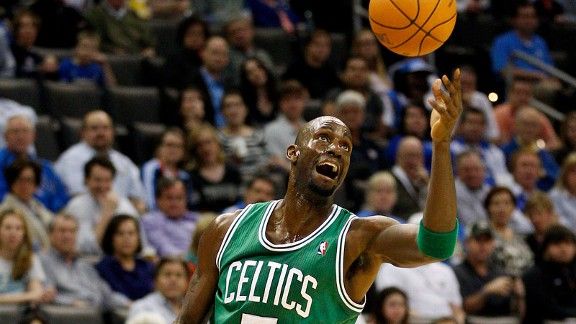 Kevin Garnett is playing more center this season ... even if he doesn't like that idea.BOSTON -- Even before Jermaine O'Neal aggravated a left wrist injury before the All-Star break, Celtics coach Doc Rivers had decided to insert Brandon Bass into the starting lineup. That meant shuffling Kevin Garnett -- somewhat begrudgingly, at least from the player's perspective -- to the center position in the new-look starting 5.

And while Garnett has thrived over the last three games, averaging 21 points and 9.3 rebounds per game since coming out of the All-Star break, he fully admits he's less-than-thrilled with the idea of playing the center role. Even still, he's willing to do anything that helps this team win games.

"I have a lot of confidence in myself when it comes to playing basketball, and positions are just numbers to me. But if it comes to preference, I enjoy the 4. There’s a lot more versatility in the 4. The 5 you’re kind of stuck in mud and cement and you know things are written -- there's not a lot of variation in the 5 position. But this is what it is, and I’m enjoying it and I’m adapting and doing whatever I can to give my team an edge."

As Garnett bottom-lined it, "Doc, he's the captain, so whatever he says goes."

Rivers knows the idea of being classified a center irks Garnett, maybe more so than actually being there on the floor. But Rivers really likes the advantages he's seen so far, particularly when Garnett has been paired with Bass to start games.

"First of all, [Garnett is] so smart defensively, [opposing centers] will be bigger, but they have to be awful smart to score on him," said Rivers. "He’s so crafty. Secondly, I think his speed now, he’s the quicker person, where at 4, there’s a lot of 4s as quick or quicker. Now all of a sudden, he’s the fastest 5, so that’s a big advantage for us, especially in our pick-and-rolll game, which, if you’ve noticed since they break, we’re running far more of it. Because when he pops and rolls, that’s a 5 trying to get back to him, they can’t catch him. Then with Brandon being able to space the floor on the opposite side, it really stretches the floor for us."

Rivers admits he hasn't tweaked the language of Boston's playbook, so a lot of calls still reference Garnett at the 4 position, maybe helping to mask the fact that he's playing the 5.

"I don’t even think he calls it center; I never say it," said Rivers. "It’s funny, I have our plays, they [still identify Garnett as the 4], not for any mental reason. He knows he’s at 5, but I don’t think he looks at it as being a center."

Rivers admitted his lone concern is trying to figure out how opposing teams will match up with Boston's frontcourt on a game-to-game basis.

"You’re not sure who's going to guard who at the 5 and the 4 each night," said Rivers. "With us, defensively, we like to know who wer’e going to guard, but we don’t like cross-matchups. That’s the only thing that's been a little tricky. But other than that, it’s been pretty good."