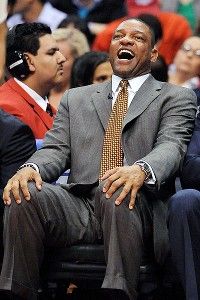 Doc Rivers can laugh now after his prediction that the team would stay intact came true.SACRAMENTO, Calif. -- A handful of nuggets after the Celtics engaged in a shootaround Friday morning at Power Balance Pavilion, where they visit the Sacrament Kings this evening:

* Doc Rivers preached throughout this West Coast trip that he believed the team would still be intact on Friday. That didn't stop him from joking about the situation when the team gathered for shootaround. " I told them I was surprised to see them all," quipped Rivers.

* Given Boston's penchant for making deadline moves, did Rivers expect a trade? "I thought we were going to get [Lakers stars Pau] Gasol and [Andrew] Bynum and Kobe [Bryant]. But they turned down the second-round draft pick that we offered," he deadpanned. "No, I didn’t think so. I really didn’t. I didn’t think we were going to do much."

* Rivers had one other one-liner in him. While explaining how he communicated with Celtics president of basketball operations Danny Ainge during the deadline process, Rivers noted, "We didn’t talk a lot this year. That was the point I was making to guys. In years previous, we’ve had a ton of conversations. I could just feel that it was pretty quiet and we didn’t talk much. If we did, we talked about Marquette spanking BYU [in the NCAA tournament]."

* Rajon Rondo took a little jab at all the media coverage centered on him before the deadline, particularly those who opined on his demeanor while trying to explain why the Celtics might be interested in moving him. "I had fun with it," said Rondo. "Everybody was complaining about me, how my attitude is and stuff like that. I had fun listening to everybody’s opinion that doesn’t know me."

* While the future is a bit more clearer because the Celtics know their core will be intact, Kevin Garnett said the team wasn't looking too far ahead, especially knowing that an injury could be crippling to an already thin-on-depth squad. "You try to focus on what’s in front of you, try to focus on the priority, and the task at hand," he said. "I think we do a good job of that. I don’t really necessarily think about tomorrow. I hope that I wake up to see tomorrow, to be honest."