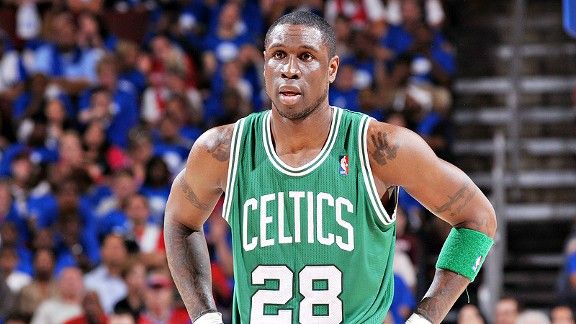 Will Mickael Pieturs be back in green next season?MIAMI -- Celtics reserve guard Mickael Pietrus expressed great fondness for his time in Boston this season and suggested after Boston's Game 7 loss in Miami on Saturday that he would have interest in returning for another run at a title.

"(The Celtics) work hard, they play hard, and every day is a part of history, so, that's what I was born for, to succeed and help history," said Pietrus. "Now it's you've got to go home and try to relax and work hard in the summertime, because I believe in my team."

Pietrus admitted during the playoffs that he will almost certainly need a second arthroscopic surgery on a right knee that flared at times during the 2011-12 campaign (this after Pietrus had a similar procedure last year before a nasty separation with the Phoenix Suns). The knee limited his consistency, particularly on the offensive end, throughout the season.

The question is whether Pietrus and the Celtics can find an agreeable contract number. After facilitating a buyout with the Suns, Pietrus inked a one-year, minimum-contract deal with the Celtics on Christmas Eve. It's likely he'll find more attractive deals on the open market -- maybe more years or more money -- but the chance for a title could help Boston retain him at a reasonable rate.

And Pietrus seems to put a value on accomplishing that goal with a team with the history of the Celtics.

"I want it to happen, because, with the Celtics, you've got to respect that jersey, it's all about history," he said. "But, you know, that doesn't mean I'm going somewhere else. They love me. I love them, too. So I'm going to work hard to bring them Banner 18."

Pietrus also heaped praise on his relationship with coach Doc Rivers and that might help entice him back to Boston.

"Doc, to me, is like a dad," said Pietrus. "I came here, he took me under his shoulders, treated me like his son, and that's why I was so grateful to the Celtics this year, and so grateful to the players, too. So, hopefully I'll be back under his shoulder again next year and do it again. I just want to play hard for my team, play hard for Doc, because he has respect for me, I have respect for him -- and that's what it's all about for the franchise, respect."