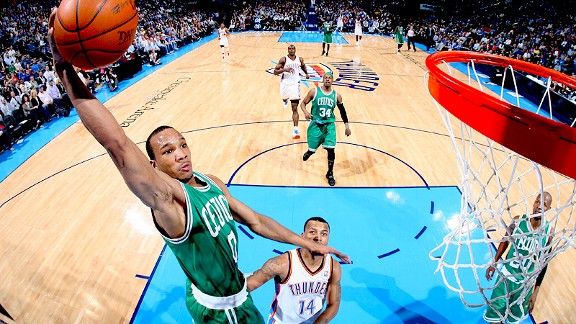 Avery Bradley made everyone take notice of his play during the 2011-12 season.Over the three weeks leading up to start of the new league year on July 1, we'll take a player-by-player look at the Celtics' 2011-12 roster and how each player's season unfolded, assigning a grade for their overall performance. This is the third in the series of report cards:

Season in a paragraph: The buzz entering the season was whether Bradley could make the leap to rotation player after barely seeing the floor in an injury-stalled rookie campaign. By the end of the 2011-12 season, Bradley was the starting shooting guard -- bumping aside Hall-of-Fame-bound Ray Allen -- and found himself with multiple votes for the NBA All-Defensive team. While some go through a sophomore slump, it was a sophomore surge for Bradley, whose opponent-infuriating on-ball defense opened all sorts of opportunities for him. Some were left wondering if the Celtics would still be playing basketball if Bradley hadn't undergone season-ending shoulder surgery during the playoffs.

Season highlight: With both Ray Allen (ankle) and Mickael Pietrus (concussion) sidelined in late March, Bradley stepped into the starting 2-guard role and began the process of not relenting it. Playing 40 minutes against the Wizards on March 25, Bradley poured in 23 points on 9-of-14 shooting in an 88-76 triumph. His inspired defensive play with the first unit -- along with the emergence of his offensive game -- soon gave coach Doc Rivers the opportunity to make a starting lineup swap he had been debating with Allen since the previous season (just never had the talent at the 2 to make a move). The only thing that slowed Bradley the rest of the way: A left shoulder that dislocated multiple times, including three times in the postseason, forcing him to go under the knife (which better belongs in the category below).

Season lowlight: Bradley's offensive emergence late in the season was all the more incredible based on how much he struggled with his shot early in his pro career (including the start of this season). At the end of January, Rivers pleaded with reporters that Bradley was better than his shooting chart suggested (he couldn't have been more right; Bradley started generating easy buckets as a cutter going at the basket and his jump shot fell in line soon after). But there was a lean stretch in mid-February where Bradley had essentially fallen out of the rotation as Boston limped to the end of the first half (losing seven of eight heading into the All-Star break). It wasn't until mid-March that injuries opened some doors for Bradley to emerge.

Teacher's notes: Bradley's ascension to the starting lineup in the final month of the season was truly remarkable -- and much deserved with the way he played. We debated an A- grade because of how much he exceeded start-of-the-year expectations, but we held back only because of his limited role the first three months of the season. It's no surprise that Boston played some of its most inspired ball with him aiding the first unit. Again, you can't help but wonder how things might have played out if the Celtics had his defensive talents on the floor to help combat the Heat in the Eastern Conference finals.

What's next?: It'll be a summer of rehab for Bradley, who will look to get his "Lego" left shoulder healthy in time to be back on the floor for the start of training camp. The Celtics have Bradley under their control for three more seasons, but if he continues to emerge, it might behoove the team to start thinking long-term deal (keep in mind Rondo's deal, which looks like a steal now). If Bradley is Boston's shooting guard of the future, he'll need to continue to hone his offensive skill set and turn that mid-range jumper into a consistent weapon (all while finding ways to still attack the basket without defenses getting hip to his cutting abilities). One underappreciated aspect of his game: Bradley was excellent in transition -- more young legs for Rondo to run with -- and Synergy Data suggest the Celtics need to find ways to run him off more screens (Bradley scored 24 points on 17 possessions -- 1.412 points per play -- and ranked in the 98th percentile). Consider this: Ray Allen ranked 44th in the league (230 points on 213 possessions; 1.08 points per play).

Don't agree with teacher? Just want to sound off on Bradley's 2011-12 season? Leave your thoughts in the comments section.