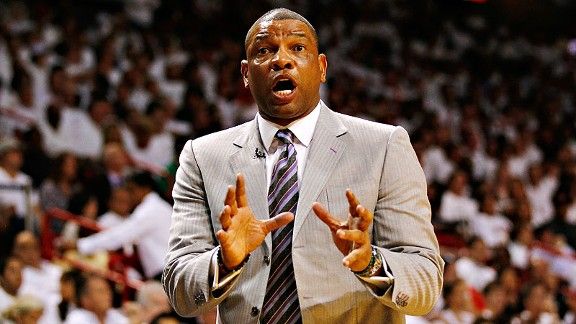 Celtics coach Doc Rivers got the most out of a team that faced incredible adversity.Over the three weeks leading up to start of the new league year on July 1, we'll take a player-by-player look at the Celtics' 2011-12 roster and how each player's season unfolded, assigning a grade for their overall performance. This is the 17th in the series of report cards:

Season in a paragraph: Despite speculation that he'd spend a year away from coaching, Rivers inked a five-year, $35 million extension to return to Boston last summer and -- even as the highest paid hoops coach in the wake of Phil Jackson's retirement -- he earned every penny during an adversity-filled 2011-12 season. From failed moves in the preseason, to head-shaking injuries woes, to first-half struggles, and an improbable second-half charge with a depleted roster, Rivers made the most out of what he had and nearly willed this team back to the NBA Finals.

Season highlight: If Rivers is being honest, it was probably a random Wednesday night in February when he snuck down to Chapel Hill to watch his son, Austin, a freshman at Duke hit a monster game-winning 3-pointer as Duke topped North Carolina in a rivalry matchup (and watching Austin get drafted Thursday night was a bigger highlight than any of Boston's own draft haul). For the Celtics as a team, Rivers' finest moment might have come at the team's lowest moment. After absorbing a lopsided loss in Oklahoma City to finish the first half of the season two games under .500, Rivers informed his staff that changes would be made in the second half -- most notably moving Kevin Garnett to center and Brandon Bass into the starting lineup while tightening up the rotation. Boston started its climb from that moment.

Season lowlight: A sideline embrace with Kevin Garnett in the waning moments of Game 7 of the Eastern Conference finals in Miami -- signaling both the end of Boston's season and the start of an uncertain summer -- was one of the more somber moments of the year. For Rivers, things beyond his control probably were the hardest to endure, notably preseason moves that failed to go through (like Boston nearly flipping Jermaine O'Neal for David West or a deal for Reggie Evans falling through before he landed with the Clippers). Couple that with Jeff Green's season-ending heart ailment and the preseason couldn't have gone much worse for the Celtics.

Teacher's notes: This team could have seemingly given up at so many different points, but Rivers always kept his eyes on the finish line. When everyone said his team was washed up at the start of the year, he tried to tell us all they were simply out of shape. When everyone tried to bury his team at midseason, he made the moves to give them a chance. When everyone said this team was destined for a second-round exit, Rivers kept pushing to see what would happen and nearly got this team to the championship stage. You can make the case that Boston gave Miami its stiffest challenge en route to a title, coming eight minutes away from a third trip to the NBA Finals in five seasons. This almost certainly was Rivers' finest coaching job on the Boston bench, squeezing every last drop out of this group (and maybe giving them the confidence to try it one more time next year with the potential for better health).

What's next?: Rivers said when he re-signed last summer that he was committed to whatever lied ahead, including a possible rebuilding phase. It looks like Boston's best option this summer is to put the band back together for one more charge, then decide how to reload. The Celtics are in good position with cap space at their disposal, but Boston's biggest selling point to free agents is clear: Rivers on the bench.

Don't agree with teacher? Just want to sound off on Rivers' 2011-12 season? Leave your thoughts in the comments section.