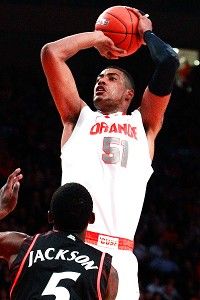 The Celtics took Fab Melo at No. 22 in Thursday's draft.* McDonough's take on first-round picks: McDonough opened his meeting with the media by noting: "These are two guys we had rated a lot higher, we thought they were both lottery talent. Frankly we didn’t expect them to be there where we were picking. So we’re excited to get them. We think Jared is a starting-caliber power forward, down the road. We love his ability to play with his back to the basket and he’s a good passer out of the post. He’s a good rebounder; he's a pretty complete player. Fab is a shot-blocker, he’s also a defensive presence in that he takes charges. And he’s developing an offensive game. Fab’s from Brazil, he’s only been playing the game for a few years, but his improvement, especially from last year to this year, was fairly obvious."

* Rivers' take on first-rounders: Added Rivers on a conference call from New York: "Obviously we needed to address size. The fact that, No. 1, Jared Sullinger fell to us, is just fortunate. Last year he would have a been a top-5 pick. It gives us a rebounder, a high IQ player, a good player, a really good player from the outside. Fab Melo does the same thing. He has size and we like size -- we needed size. It gives us the chance to work with him. We think he can be a good player."

* Concerns about Sullinger's back? Both Rivers and McDonough downplayed the severity of Sullinger's back woes that caused his slide. Said Rivers: "We feel pretty good about it or we wouldn't have taken him. Obviously, we're going to have to watch him and make sure he has the right treatment all the time. ... All the doctors that we talked to gave the clearance and none of them red-flagged him. That's fine by us." Added McDonough: "Our doctors took a look at him at the combine in Chicago. There are, I guess, what you could call 'minor concerns,' for the back. Obviously it wasn't enough of a concern to deter us from taking him. We think if Jared were completely healthy, if there were no issues, he would be a top-10 pick. Our doctors and our basketball staff determined that it was worth what we considered to be a slight risk."

* Rivers on New Orleans' drafting his son, Austin, at No. 10: Rivers didn't mask his excitement in being alongside his son for his big day. "I hope you understand, I was far more excited today for my son," said Rivers. "This has been a dream for him. We were sitting there and we got the call. I've been in this league so long, and when (Hornets general manager) Del Demps and (coach) Monty Williams said they got him, I still didn't believe it until I heard David Stern call his name."

* C's explored moving up: Both Rivers and McDonough said the team explored moving up, but never got close to a deal and ultimately decided the talent remaining where they were picking didn't require a move up that might have sacrificed a pick. Said Rivers: "Well, I'm not going to talk about the war room. We were always trying to move up if we could. With the two picks that we had, I can tell you, where we had to go to get any guy that interested us, we couldn't even come close." Added McDonough on a potential move up: "Not very close. We explored it. As always, you call around, see what you could get, if there's somebody you have rated super high sliding. But to be honest, we had a number of players we liked, and then once you got past about the late lottery, we had enough guys we liked to be comfortable and said, 'We don't want to lose two picks just to get one guy who we might have rated slightly higher.' We had Jared and Fab rated very highly. So, in retrospect, it would have been a shame if we traded two picks and just got one of those guys, instead of getting both."