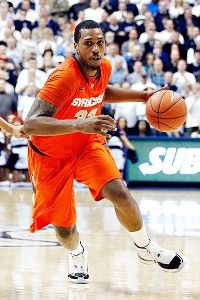 Can second-round pick Kris Joseph find a way onto the Celtics' roster?BOSTON -- The Celtics had defense on their minds when they selected Syracuse sophomore center Fab Melo with the 22nd overall pick in Thursday's 2012 NBA draft. But the opposite might have been true when they selected Melo's teammate, senior forward Kris Joseph, just a few hours later with the 51st overall pick.

Joseph proved to be a consistent source of offense for the Orange last season as he averaged a team-high 13.4 points, ahead of even Dion Waiters, who was selected fourth overall by the Cleveland Cavaliers on Thursday. Joseph scored a career-high 29 points in a hard-fought 64-61 overtime victory over the 11th-ranked Georgetown Hoyas on Feb. 8, knocking down 9 of his 20 field goal attempts, including 6-of-11 from 3-point land. He went on to average 10 points and 3.2 rebounds for the Orange during the 2012 NCAA tournament.

Standing at 6-foot-7 and weighing in at more than 200 pounds, Joseph has an NBA-ready body, flowing with athleticism that sets him apart from a number of his peers.

"Kris, I think he's an all-around player. I like his potential," said Celtics president of basketball operations Danny Ainge. "He can shoot, he can put the ball on the floor, he's got good size at the small forward position. We had Kris in for a workout, we watched him very close this year, and he performed excellent in a workout with some of the top [small forwards] in the draft this year. He wasn't as consistent as I would like to see him in his years at Syracuse, but he shows flashes of being a very good player."

But for all of the raw skill Joseph appears to have, he'll still face an uphill battle when the time comes to make the Celtics' final roster for the 2012-2013 season.

The Celtics' picture might seem cloudy right now, given the looming uncertainty surrounding the likes of Kevin Garnett and Ray Allen, but assuming those veteran chips fall into place -- at least Garnett -- Boston will look to reload for another run at a championship. That means adding veterans, primarily -- something Ainge confirmed on Thursday -- and with two highly regarded first-round selections in Melo and Ohio State forward Jared Sullinger, coupled with a crop of other young players, including JaJuan Johnson and, potentially, E'Twaun Moore and Greg Stiemsma, already in front of him, Joseph could find himself on the outside looking in.

That's not to say Joseph isn't talented enough to play at the NBA level. His athleticism makes him a worthy candidate for the professional ranks, and it could come down to whether he plays with the consistency that Ainge alluded to. Either way, Ainge can at least guarantee Joseph, like his fellow rookies, a shot at making the roster.

"Sometimes the rookies turn out great and sometimes they struggle. Time will tell," Ainge said. "And it's up to them. They'll get an opportunity and if they work at it and they get better -- some guys get better, some don't. Having said that, I'm very optimistic for these three guys. I think they have a bright upside, and all of them are workers. All of them put in the time and want to improve, and we'll see if they can make the adjustments."