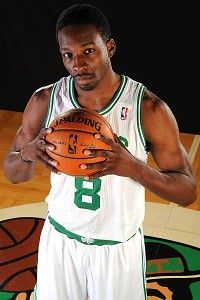 Danny Ainge expects Jeff Green back in Boston next season.ALLSTON, Mass. -- Celtics president of basketball operations Danny Ainge hinted that a deal to bring back free agent Jeff Green is nearing completion and both Ainge and Green's agent expressed optimism a deal will be consummated when the league's moratorium lifts later this month.

Green, traded to Boston in February of 2011, sat out the entire 2011-12 season after undergoing surgery to repair an aortic aneurysm that was detected in training camp as the two sides prepared to ink a one-year, $9 million deal.

Despite being an unrestricted free agent this summer, Ainge and Green's agent, David Falk, acknowledged a deal is near.

"We intend to have Jeff back," said Ainge after introducing Boston's three rookies during a community event at the Jackson Mann/Horace Mann Educational Complex. "Nothing is done, but we intend to have him back. I think we’re going to enter a contract with him, hopefully by the end of the moratorium."

Added Falk: "Of course [Green] wants to come back here. It's not done. I am optimistic it will get done, because this is where Jeff wants to be... There's no specific timetable, but (Boston is) clearly where he wants to be."

The relationship between Green and the Celtics was strengthened through his heart woes as Ainge accompanied him to doctor visits throughout the detection and repair, which will allow Green to resume his basketball career next season without limitations.

"Jeff, when he got traded to the Celtics, he loved his experience, he wanted to prove that he’s a better player than he played when he got here (at the end of the 2010-11 season)," said Ainge, who dealt Kendrick Perkins and Nate Robinson to Oklahoma City in exchange for Green, Nenad Krstic, and a first-round pick (used to select Fab Melo in this year's draft) at the 2011 trade deadline.

It's a sentiment echoed by Falk, who suggested Boston distinguished itself with their handling of Green's situation, particularly the care shown by Ainge and coach Doc Rivers.

"He's had a lot of interest from other teams, but, as I said earlier with (Boston first-round pick and fellow Falk client) Jared (Sullinger), having managed so many great players in my career, I believe the most important thing isn't where you have the most endorsement opportunities, where the media is the flashiest," said Falk. "It's being in a place where you have a great fit, and I think that one of the things that makes the fit the most effective is the relationship a player has with his coach. We had Doc's son, Austin, we represented this year. He went to New Orleans, and there's been a really strong affinity between the Rivers family and Monty Williams, when he was playing. And I think when you have a coach having your back, you're halfway home. And I think the relationship that Jeff has with Doc is very special.

"He's sort of known Doc since he was in college because he played with his older son, Jeremiah. And so that's our hope. It's not done. Danny and I have made a lot of deals over the years. I'm optimistic it will get done, and, for me, the chance to have the FAME frontcourt, maybe three years down the road, with Jared and Jeff playing together is pretty exciting."