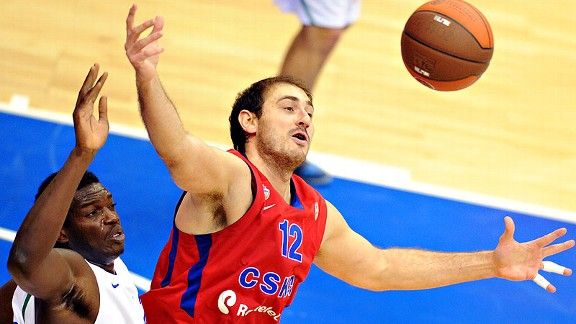 Former Celtics center Nenad Krstic at work for CSKA Moscow last season.As the Celtics look to fill up the final spots on their 2012-13 roster, armchair general managers (and media alike) are looking for potential avenues that would allow Boston to bring back a healthy salary when the only remaining chip the team holds is the biannual exception (maximum of two years, $4.1 million total).

With an overseas report earlier this month indicating that Nenad Krstic might not return to CSKA Moscow (where he bolted on a two-year agreement during the NBA lockout), some have wondered if the Celtics could utilize his Bird rights (which the team maintains) to facilitate a sign-and-trade.

The new collective bargaining agreement appears to make that impossible.

After the tomfoolery that occurred with Keith Van Horn (Nets land Jason Kidd) and Aaron McKie (Lakers land Pau Gasol), the league closed a loophole in the new CBA by noting that a player can no longer be included in a sign-and-trade unless he finished the previous season on the team's roster.

That appears to wipe out that option for Boston. Now, if the Celtics simply want to re-sign Krstic -- provided he desires to return to the NBA -- they can go over the salary cap to bring him back. Acquired in the trade deadline swap that sent Kendrick Perkins to Oklahoma City, Krstic earned $5.5 million in 2010-11. And, regardless of how Greg Stiemsma's restricted free agency plays out, Boston could always use a big man.