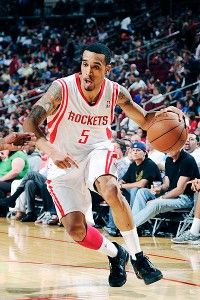 Courtney Lee said the Celtics are one of eight teams he is considering playing for.ORLANDO, Fla. -- Free agent guard Courtney Lee, who met with Celtics coach Doc Rivers over the weekend, dropped by the Orlando Summer League Monday afternoon and confirmed that Boston is one of "more than eight teams" in the mix for his services.

After losing sharpshooter Ray Allen to the Miami Heat on Friday, Boston ratcheted up their pursuit of Lee as a possible replacement. He averaged 11.4 points per game for the Houston Rockets last season and hit 40 percent of his 3-point attempts.

"I wouldn’t know how to characterize (Boston's position in his free agency)," said Lee, who originally received an offer sheet from the Houston Rockets, only to have it rescinded when they elected to pursue other free agents. "I have a great relationship with Doc, from the first time I stepped on an NBA court. I would say our meeting (on Saturday) went well. As far as characterizing where I’m at with the team -- coach and player-wise, we’re on the same page -- it’s just my agent and their front office guys have to talk and work something out."

Unless the Celtics can get creative with a sign-and-trade offer, the team seemingly doesn't have the necessary funds to lure Lee. Boston can only offer him a maximum of a two-year, $4.1 million deal with the biannual exception, which would actually be a pay decrease after Lee made $2.3 million last season (and he originally had a $4.4 million qualifying offer for next season).

"(The Celtics) expressed their interest, I expressed my interest -- it’s up to the front offices and my agent," said Lee, who stressed that being a part of a contender ranks high on the wish list for his next team. "They need to communicate and go from there."

Boston has added veteran guard Jason Terry this offseason but may need to offset the absence of Avery Bradley, who needs right shoulder surgery and could miss the start of next season. A potential starting role on a contending team might help entice Lee despite the limited resources.

The Minnesota Timberwolves, Atlanta Hawks, Indiana Pacers, Dallas Mavericks and Phoenix Suns, sources said, are the other teams in pursuit of Lee. The Chicago Bulls have long been interested in Lee, as well, but the Bulls' limited financial flexibility means they'd also need a sign-and-trade deal to land the swingman.