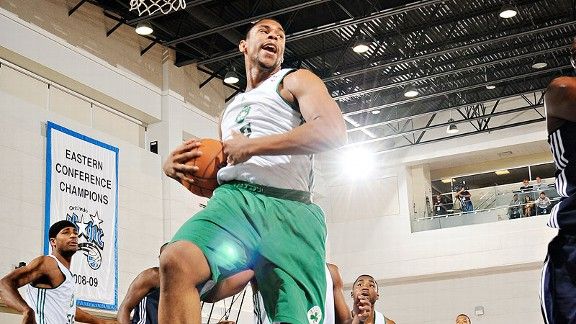 Brandon Knight scored a game-high 19 points on 5-of-11 shooting and handed out 14 assists to spark the Pistons. Detroit also got solid efforts from their frontcourt of Austin Daye (15 points, 8 rebounds, 5 blocks) and rookie Andre Drummond (10 points, 8 rebounds, 2 blocks). JaJuan Johnson and Kris Joseph each registered 17 points to highlight Boston's effort.

The Celtics want Kris Joseph to be more aggressive and Thursday's game was easily his best of the summer. Coming off the bench, Joseph hoisted 16 shots over 27 minutes. He didn't shoot a high percentage, but he finished with a summer-high 17 points and added 11 rebounds. That's exactly the type of effort a second-round pick needs to stick around.

Back in the starting lineup after a strong finish to Wednesday's win over the Pacers, Johnson put together a nice all-around effort, not only chipping in the 17 points (on 6-of-12 shooting), but adding six rebounds, three blocks, and two assists over a team-high 32:57. He's been up and down, but his athleticism is evident.

Celtics assistant coach Ty Lue, in charge of the summer squad in Las Vegas, had been joking that he was going to throw his name into the hat for the vacant Orlando Magic job after winning his first three games in a head coaching role at summer league. Shuffling the deck a bit with his starters -- Johnson started alongside Stephane Lasme, Fab Melo, Larry Owens, and Jamar Smith -- the Pistons built a comfortable first-half lead and improved to 3-1 this summer (while Boston fell to the same mark).

So his stat line won't wow you -- 2-of-9 shooting, 11 points, seven rebounds, and a block over 28:25 -- but Jared Sullinger got a nice test in matching up with Drummond. Even though his shooting percentage hasn't been great this summer (a result of some ill-advised perimeter shots, too), Sullinger has been a constant contributor, particularly with the way he's able to get to the free throw line (7-of-8 shooting there Thursday).

NOW FOR THE BAD NEWS

E'Twaun Moore endured his worst outing of the summer, missing seven of the nine shots he put up and finishing with six points and one assist over a mere 16:40 in a reserve role. After heavy minutes over the first three games, Thursday's effort gave him a bit of a blow... Fab Melo struggled mightily at times again. The Celtics did shift to a zone at times, which appeared to help him a bit, but he's clearly a project that needs some time in Kevin Garnett's lab.

The Celtics wrap up the Orlando Summer League on Friday morning against the host Magic. Then it's a weekend off to catch their breath before trekking to Las Vegas for five more games to wrap up the summer slate.