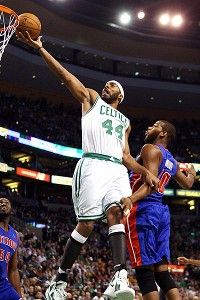 Chris Wilcox will return to the Celtics for the 2012-13 season.Free agent center Chris Wilcox, who spent part of the 2011-12 season with the Boston Celtics before a heart ailment cut his year short, will re-sign with the team, according to a league source.

Wilcox appeared in 28 games last season, averaging 5.4 points and 4.4 rebounds over 17.2 minutes per game before a routine screening in March detected an aortic irregularity. He underwent surgery later that month at the Cleveland Clinic.

Wilcox only this past week resumed basketball activities, but, once he completes his rehab, he will add much-needed frontcourt depth to the Celtics.

Boston moved quick to ink Wilcox to the taxpayers' mid-level exception ($3 million) after the lockout lifted last season. He started slow -- hindered by minor injuries -- but came on strong and proved to be both a force on the glass and someone that could run with Rajon Rondo in transition.

The 10-year veteran has never been to postseason, but the Celtics kept him a part of the team even after he was waived to make room for center Ryan Hollins. Wilcox was spotted in the locker room during the playoffs. He came to Boston for a couple playoff games and watched from the baseline opposite the Celtics bench.

Not only did Wilcox have his season ended by a heart ailment, so did teammate Jeff Green. Both will be back with the Celtics next season.