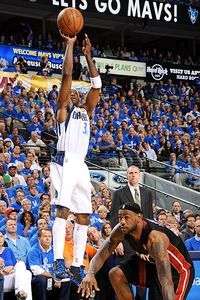 A former announcement on Terry's deal could come as early as Wednesday. The two sides have had a handshake agreement in place for nearly two weeks now and the team introduced him alongside other offseason acquisitions this past weekend, but the Celtics had used that time to explore sign-and-trade options hoping to free the midlevel chip to use on another outside free agent.

Dallas never warmed to Boston's offers and utilized its remaining cap space this week to sign O.J. Mayo, one of the players the Celtics reportedly coveted to add depth at the shooting guard spot -- this after losing Ray Allen to the Miami Heat and with Avery Bradley's status uncertain for the start of the regular season after undergoing a pair of shoulder surgeries in recent months.

So where do the Celtics go from here?

* Boston still owns its biannual exception ($1.975 million), which is its only option above a minimum contract for an outside free agent. The team can dangle that with the lure of a potential starting job if Bradley isn't healthy enough to go at the beginning of the year and hope that a big-ticket player will take a small-money paycheck for a quality role on a contender.

* If the Celtics covet a free-agent like Courtney Lee, who met with Doc Rivers in Orlando last week and expressed an interest in Boston soon after, they can still pursue a sign-and-trade with the Houston Rockets that would facilitate a bump in Lee's salary beyond what Boston can otherwise offer. That would require Boston to send out both players (either second-year guys E'Twaun Moore or JaJuan Johnson) or its own free agents (Mickael Pietrus, Keyon Dooling, or Sasha Pavlovic) along with draft picks to entice the Rockets to aid the move (if they are going to lose Lee, it's in Houston's interest to get something in return). Alas, the Rockets have been busy with moves of their own, including luring restricted free agent Jeremy Lin away from the Knicks.

* The Celtics own limited rights to a trio of last year's shooting guards in Pietrus, Dooling, and Pavlovic. If unable to hook an outside free agent -- even if that meant going the minimum route on a veteran like Tracy McGrady or Michael Redd -- Boston could circle back to some veteran players familiar with their system. Pietrus seems like the ideal candidate, nearly ascending to a starting role last season before enduring a scary concussion in Philadelphia. Yes, Pietrus struggled with his shot in the postseason, but he's a more-than-capable defender who could easily slide into the starting role with hope that his 3-point shot returns to form. The question is whether he'd be interested in signing for the biannual exception (or less). Coming off his second straight offseason knee surgery, Pietrus could reestablish his value on a one-year deal and re-test unrestricted free agency next summer, all while getting to play for a contender again (something that will make Boston look more attractive than other suitors as free agency moves into late July).

* Boston didn't give rookie Fab Melo his preferred No. 51 jersey, an indication there's some interest in bringing back locker room leader Keyon Dooling, whose on-court contributions also picked up late in the season after he overcame some minor injuries last year. Regardless of how Boston fills out its shooting guard depth, Dooling is an option -- at the right price -- to help fill out the bench.