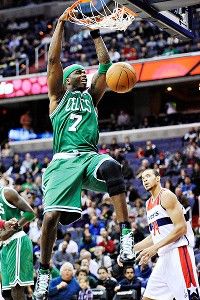 Jermaine O'Neal delivers a two-handed jam for the Celtics.Former Celtics center Jermaine O'Neal, who earned $12 million while appearing in a mere 49 games over two injury-decimated seasons, voiced displeasure with his offensive role in Boston after working out for the Los Angeles Lakers in Las Vegas on Tuesday.

O'Neal heaped praise on the city of Boston, its rabid sports fans, and the Celtics organization as a whole, but made it clear he thought he wasn't properly utilized on the offensive end, suggesting that contributed to his inability to thrive here.

From the Boston Globe:

"The hardest thing for me was to not be able to do some of the things I have been quite comfortable with doing all my life. I accepted the challenge. I accepted the role. (I didn’t want) 10 shots a game, but it was hard to be told not to worry about (scoring)...

“When I was asked about (offense), I tried to be as professional about it as possible but it’s hard. You put any player in that position and ask them how that’s going to pan out for them; it’s hard mentally because you’re fighting against yourself every single day. And it’s not like you’re getting the reps, even in practice, because they’re gonna stay away from that in practice because they don’t want you to start leaning towards that in games. It was really rough. The things that kept me going was the guys on that team, (team president of basketball operations) Danny Ainge and just the passion of that city. No one wants it to end the way it ended, but it did. I was never really healthy mentally.

“It took everything in my mind, body and soul to be professional about it. When that’s said to you in front of a team, it bothers you...

“Listen, I don’t want to confuse anybody doing this interview. I’m not saying by any means I can go for 18, 20 a night. But I know I’m still good enough to go for 20 on any given night, if given the opportunity. I wasn’t given the opportunity to post up at all. Not even in practice."

O'Neal, who trekked to Germany this summer to undergo the blood-spinning therapy on his knees made famous by the likes of Kobe Bryant and Alex Rodriguez, clearly is bit delusional about what went wrong in Boston.

His own inability to stay on the court affected his offensive contributions far more than his offensive role . Yes, the Celtics asked him to be a fifth option behind the Big Four, but that never prevented others from making a tangible impact from the center position.

The fact that O'Neal is lamenting his offensive role is somewhat laughable.

Consider this: In two seasons in Boston, O'Neal averaged 0.822 points per play overall, never ranking higher than the 29th percentile among all NBA players, according to Synergy Sports data. He generated only 46 total post-up opportunities during 49 games, but converted a mere 12 of 39 shots (30.8 percent), which included missing 14 of the 17 post-up shots he generated during the 2011-12 season.

Not exactly making a strong case to throw it to you in the post, J.O.

No, it should come as little surprise that O'Neal thrived most in Boston as a cutter, taking advantage of defenses collapsing on a driving Rajon Rondo, and generating quality looks close to the basket while moving in from the other direction. O'Neal, whose game has been drifting further away from the basket, shot a mere 32 percent from 10-to-23 feet, according to HoopData, proving no less productive as a spot-up shooter.

It's not as if post opportunities weren't there. Celtics coach Doc Rivers often expressed a desire for his team to generate more offense that way and implored his team to post-up more. But in 1,000 minutes of floor time, O'Neal generated a mere 46 possessions in the post. To put that in perspective, in last season's condensed schedule, Brandon Bass had 103 post possessions. Despite being about a half-foot shorter than O'Neal and playing the entire second half as the fifth starter next to the Big Four, Bass had no problem generating attempts near the hoop.

Back during the 2010-11 season, Shaquille O'Neal had 91 post-up possessions in 37 games while splitting starting duties with Jermaine O'Neal. Shaq, who -- when healthy -- seemingly had no troubles with his offensive role alongside the Big Four, averaged 0.967 points per play on those possessions, shooting 55.2 percent on post situations. Heck, Glen Davis had 222 post-up possessions that season.

Jermaine O'Neal seems to be struggling to come to grips with his own diminished offensive talents. A battered body and high prep-to-pros mileage has left a once-elite scorer unable to dominate on the offensive end like he was accustomed to. The Celtics implored him to focus on his underrated defensive talents, but he could never seemingly get beyond his offensive role (or lack thereof).