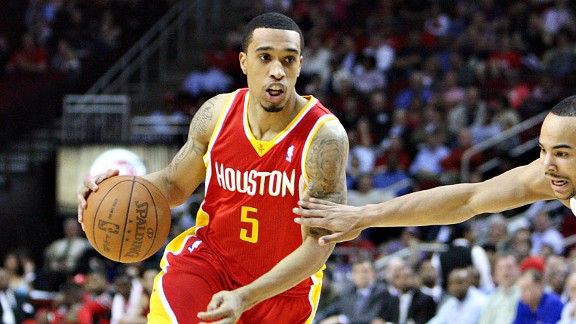 • C's get their guy: After losing Ray Allen to the Miami Heat, the Celtics put the full-court press on Lee, who met with coach Doc Rivers last week in Orlando, Fla. Still, there was heavy competition for Lee's services, particularly after O.J. Mayo signed with Dallas. But the Celtics were unrelenting, even after attempts to facilitate a sign-and-trade with the Mavericks failed, forcing Boston to use its midlevel exception to sign Jason Terry. Houston, which withdrew a $4.3 million qualifying offer to Lee earlier this summer and made him an unrestricted free agent, were able to get something in return by facilitating a deal that allowed the Celtics to sign him at a higher salary -- a max of $4.25 million first-year salary for at least a three-year deal -- than they could have otherwise offered.

• What Lee brings: The Celtics get an excellent offensive player who will help offset the loss of Allen. Lee averaged 11.4 points over 30.3 minutes per game last season and shot 40.1 percent beyond the 3-point arc in 58 appearances (26 starts). Lee averaged 0.973 points per play, ranking in the 81st percentile among all NBA players, according to Synergy Sports. He thrives as a spot-up shooter and a cutter, but his numbers don't jump out in transition. Allen thrived at delivering the trailer 3-pointer, and the Celtics will want to find a way to get Lee running with Rajon Rondo. Defensively, Lee's stats won't overwhelm you, as he allowed 0.879 points per play (37th percentile, according to Synergy Sports), but he has good length with that 6-foot-5 frame and will be a competitive defender, especially against smaller 2s.

• Necessary depth at shooting guard: The Celtics have stressed that there's no guarantee that Avery Bradley will be ready for the start of the 2012-13 season after undergoing a pair of shoulder surgeries -- though Danny Ainge said last week that there's still the chance he could be ready for camp. Lee can help hold the fort until Bradley is healthy again, while keeping Terry in that preferred sixth-man role. Once Lee and Bradley are healthy, the Celtics have the flexibility to make themselves stronger offensively or defensively and can match up better -- Bradley on smaller 2s and Lee on bigger guys.

• Celtics reloaded: Ainge and the Celtics have put together a brilliant offseason. Boston moved quickly to secure Kevin Garnett before free agency even opened and brought back Jeff Green, Brandon Bass and Chris Wilcox. They've added outside help in Terry and Lee that will soften the loss of Allen. Oh, and Boston still has its biannual exception to play with, allowing the team to add another piece to the puzzle at something above a minimum contract. All this while staying under the luxury tax threshold, which allowed it to use the full midlevel on Terry and will keep ownership happy by not breaking the bank in the quest for another title run.

• What's lost in the deal: If the package of E'Twaun Moore, JaJuan Johnson and Sean Williams holds up in this deal, the Celtics will have had to sacrifice last year's top draft pick in Johnson, along with a pair of nonguaranteed deals, to make the move (and pump up Lee's salary number). But it's a minor package for a potential starter. The Celtics liked Johnson's potential, and his athleticism is intriguing, but he didn't exactly show this summer that he had made enough of a leap to become a role player this season. Johnson would have been buried on the depth chart behind Garnett, Bass, Green and Wilcox. The Rockets can develop Johnson if they retain him, but Boston couldn't offer floor time to a player who was still figuring out the NBA level. As for Moore, he came on strong this summer and fought for a role, but it's unclear if he could have carved out a spot as a combo guard behind Rondo. With Boston's frontcourt stocked, Williams faced an uphill battle to make the team. The Rockets also get a draft pick out of the move to add to their stockpile.