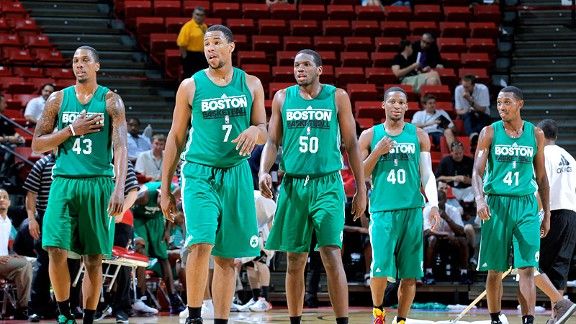 The Celtics were shorthanded for Thursday's summer league action.LAS VEGAS -- The Celtics had just taken the floor for warm-ups prior to their bout with the Sacramento Kings in Las Vegas summer league action on Thursday, when word began to trickle down the grapevine that JaJuan Johnson, E'Twaun Moore and Sean Williams were all being discussed as part of a trade with the Houston Rockets involving free-agent guard Courtney Lee.

Moore left the floor first, and stepped inside the tunnel leading to the team's locker room with Celtics head coach Doc Rivers for a private word. A few minutes later, Williams did the same, as Moore put on his backpack and climbed the stairs of the Thomas and Mack Center, eventually leaving the arena. Williams exited himself just a few minutes later.

Johnson was never seen in the arena Thursday, but in a matter of minutes, a Celtics squad with a 6-1 record with all of the chemistry and confidence in the world was torn apart, leaving summer league coach Tyronn Lue and the rest of his team to rally against the Kings. The Celtics eventually lost 91-82 -- the first blemish on their Vegas schedule.

"Right when we got here, [Celtics president of basketball operations] Danny [Ainge] came and said certain guys couldn't play," Lue said afterward. "It's part of the business. It happens all the time."

The absences of Moore and Johnson were noticeable from the start. Moore has been perhaps the team's most poised player, running the team at the point guard spot with a sense of calm and certainty, while also contributing in the scoring column whenever he's been needed. Johnson, meanwhile, had a productive 7-point, 12-rebound outing in Tuesday's victory over the Chicago Bulls, and was looking to build off of that performance. The Celtics mustered just 16 first-quarter points on 6-of-17 shooting (35.3 percent) on Thursday, marking the first time they've failed to eclipse the 20-point mark in the opening frame since arriving in Vegas.

"It's just crazy because there was no notification," rookie forward Kris Joseph said afterward. "You kind of realized what happened as the game went on. Guys weren't around, and that's just the business side of this sport right here. We had to go ahead and do what we had to do without them. Those guys were key parts of this summer league team, and we're just going to have to adjust. Now that we've played a game without them and we did what we did tonight, we'll be able to adjust these next two games."

The Celtics struggled defensively from start to finish, as they allowed a team to score more than 80 points for just the second time all summer (the Detroit Pistons scored 93 in the Celtics' only loss during the Orlando summer league). Offensively, things weren't much better, as the C's shot just 37.1 percent in the first half, and finished the game having made only 30 of 76 shots (39.5 percent).

Dionte Christmas proved to be Boston's lone bright spot for the first 3½ quarters. The tenacious guard scored a team-high 19 points on 8-of-15 shooting in just over 26 minutes of action. The two teams entered halftime tied at 38, but the Kings would go on to close the third frame on a 13-0 run to take a double-digit edge into the final period. Christmas scored nine of Boston's 16 third-quarter points, keeping the C's breathing up until that Sacramento run -- a point in time where Moore's steady hand and Johnson's defense and rebounding might have been useful.

"It was tough. It was like 2 minutes left while we were warming up and [Moore and Williams] said, 'We're not going to play,'" Christmas explained. "Tyronn Lue came and said, 'Get ready to play 35 minutes and get ready to be more aggressive on the offensive end, because those guys aren't going to be there.' That just gives me and the guys on the team a taste of the NBA. Things like that happen all the time, and you've just got to be ready any given night. I think I can be somebody who can do that. I think I can be ready at any given night."

The Celtics eventually rallied late in the fourth, as Craig Brackins, who finished with a summer league-high 12 points, buried a straightaway 3-pointer. Minutes later Stephane Lasme broke away for an open dunk, and after the Kings converted one of two free throws, Jamar Smith buried a triple from the left corner. Boston's rally was eventually put to rest when Thomas Robinson (15 points, 16 rebounds) broke away for an open dunk.