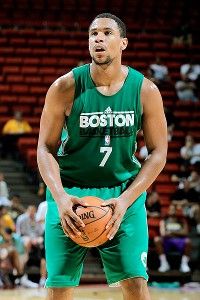 Jared Sullinger and the Celtics at work at summer league.LAS VEGAS -- Celtics president of basketball operations Danny Ainge and head coach Doc Rivers wouldn't comment Thursday on the reported sign-and-trade deal that would see Boston acquire free agent guard Courtney Lee, but they did offer an early assessment of the three rookies the team drafted back in June.

Jared Sullinger, Fab Melo, and Kris Joseph have all shined at times throughout the Celtics' summer slate, both in Orlando and now in Vegas, and their performances haven't gone unnoticed by the men calling the shots.

Ainge and Rivers concur that Sullinger has so far lived up to the hype, and they agree that he has a chance to contribute to the team this coming season.

"[Sullinger's] a good player. He's smart, passes, shoots the ball well, good rebounder," said Ainge. "He's 20 years old and we could use him this year. I think he could contribute."

Rivers said he'll wait until training camp to really gauge how much Sullinger can help the C's right away, but he's been impressed with the Ohio State product's progress so far.

"Jared is what we thought he was," said Rivers. "He's a terrific rebounder, a great passer, and can shoot the ball better than I think people knew, so he's been great.

"I think his scoring on the post will be against same-size or smaller guys. I think he'll struggle against bigger guys on the post and that's fine."

Melo, meanwhile, probably won't be seeing as much floor time as Sullinger next year, as Rivers and Ainge both noted that he was drafted for what they feel is a strong upside.

"I think Fab is getting more comfortable," said Ainge. "We need him to be more consistent and I think he will in time. I think the next few months are going to be really big for him and his development. He's got to put a lot of time in the weight room and just learning the system, defensively.

"He does have an upside, for sure. What I like about Fab is he blocks shots and takes charges. Very few people do that. And he does it already. He doesn't have to learn to do that. He does that already, and I think that that's a quality in sacrificing his body, and I think that he just has to learn our pick-and-roll coverages, and I think he'll be a terrific defender...Fab has played a lot of zone in college, so he's good at the rim and he's good at taking charges and those are things that he's done, and so now he's got to take it to another level."

Rivers called Melo a "force" who can block shots, later adding: "Fab is just a project that I think will be a player in this league at some point. I don't know if it'll be next year, but maybe."

Both Sullinger and Melo will have the benefit of being around Kevin Garnett for the next few seasons, and Rivers noted their chances of being great players increases if they embrace KG's words.

Rivers also offered heavy praise for Joseph, who's working on a non-guaranteed contract and hyperextended his left knee during Tuesday's win over the Chicago Bulls.