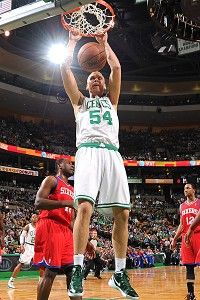 Restricted free-agent center Greg Stiemsma has received an offer from a new suitor, according to a league source.

The Celtics extended a $1.05 million qualifying offer to Stiemsma before the free-agency period, while the Timberwolves have expressed consistent interest in the 6-foot-11 big man this offseason. But while Stiemsma's camp awaits an offer sheet from Minnesota, it appears a third team has entered the fray.

This offer, when formally delivered, will almost certainly price Boston out of the Stiemsma Sweepstakes. Given their cap constraints, the Celtics are unable to match even a modest offer for his services, with only the biannual exception ($1.95 million) remaining above a minimum contract and Boston nearing the luxury-tax threshold.

The 26-year-old Stiemsma averaged 2.9 points, 3.2 rebounds and 1.5 blocks per game in 55 appearances during his rookie campaign with Boston last season. He signed with Minnesota in April 2010, but got his first NBA opportunity with the Celtics and was the team's top reserve big man by the end of Boston's injury-filled season.

If the Celtics believe they are priced out, they can rescind their qualifying offer. Boston could also dangle the biannual exception, but even that might not be enough if the outside offer is of greater value.