Stutz hopes to make most of brief look
9yGreg Payne
NBA preview: Everything you need to know for the 2021-22 season
15h
Breaking down the latest NBA rookie contract extensions on deadline day
1dKevin Pelton
Lowe: The five most intriguing players in the NBA this season
Los Angeles Lakers
2dZach Lowe
Jul 22, 2012 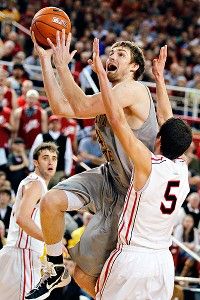 Garrett Stutz at work earlier this year at Wichita State.LAS VEGAS -- Fearing that rookie center Fab Melo wouldn't be able to play in Saturday's 88-87 loss to the Milwaukee Bucks due to the bruised left hand he suffered in Thursday's loss to the Kings, the Celtics decided to bring in former Wichita State 7-footer Garrett Stutz to help bolster the front line.

Stutz had been playing for the Minneosta Timberwolves, but an overpopulated roster made floor time scarce, and when his agent called him on Friday night to discuss playing for Boston the rest of the way, Stutz decided to walk through the open door.

"My agent called me basically last night and said, 'Hey, the Celtics need a guy. Do you want to go play for them?' I thought I'd jump on the opportunity," Stutz said.

Partly because Melo was able to play on Saturday, Stutz was used sparingly in his Celtics summer league debut, playing a total of 3:09, all in the first half. He missed his only shot and grabbed a single rebound, but coach Tyronn Lue praised the effort he saw from his new big man.

"Garrett came in and gave us some good minutes," Lue said. "He really doesn't know what we're trying to run, but he did a good job."

Not knowing the Celtics' system might be Stutz's greatest obstacle. His late addition to the team mirrored the hasty departures of E'Twaun Moore and Sean Williams prior to Thursday's game as part of the trade for Courtney Lee.

"[I] hadn't had a single practice with them, no shootaround, basically I showed up about five minutes before, got a five-minute rundown," Stutz said. "They told me a couple of simple defensive coverages like pick-and-roll stuff, told me two or three simple sets and then were like, 'We'll just play you a couple minutes and see what happens.' Just go out there and I thought I'd play my butt off and hope for the best."

While it's unlikely Stutz will be able to show enough in the Celtics' final game of the summer to earn any sort of training camp invitation -- Saturday's addition of veteran center Jason Collins hindered Stutz's chances even further -- he said he'll put all of his cards on the table on Sunday and hope for the best.

"I can only control the circumstances that I can control," Stutz said. "I'll just give it my all and play as hard as I can and hopefully get a chance to make a shot or two, but really just play great defense, rebound, and do whatever the Celtics need me to do."