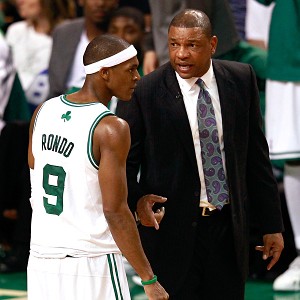 Doc Rivers says Rajon Rondo continues to grow on the job, which he showed this offseason.ESPN Boston's Jackie MacMullan caught up with Celtics coach Doc Rivers, who opined on the Celtics' offseason, including the departure of Ray Allen, Rajon Rondo's "terrific summer," and all of Boston's roster additions. A few of the highlights:

* Rivers on Rondo organizing a team outing to L.A., which mixed basketball and fun (like a group flag football game): "Rondo has been great, just terrific this summer," Rivers said. "He reached out to all the players and got every single one of them to fly to L.A. and practice together. They put in about four or five hours a day. Paul and KG were already out there, but Rondo got Jason and Courtney Lee and all the other guys on board too. He called and asked me what I thought of the idea. I loved it, especially because it was him that organized it."

* Rivers on the addition of Darko Milicic: ""It didn't cost us much," Rivers said. "He has it in him, and if we can get it out of him, then great. If not, well, I'd rather take a chance on a really talented guy."

* Rivers on getting back to work: ""I'm very excited," Rivers said. "I like our team, but then, I like our team every year on paper... I can't wait to get in the gym and see if I like them on the floor."