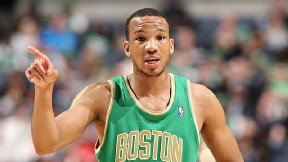 Bradley, a third-year guard, landed on just five of 121 ballots cast by sportswriters and broadcasters, but earned a pair of first-place votes while accruing 15 points overall. Memphis' Marc Gasol won the award with 30 first-place votes and a total of 212 points, while LeBron James (149 points), Serge Ibaka (122), Joakim Noah (107), and Tony Allen (102) rounded out the top 5.

A few thoughts on where Bradley landed this year:

* Those that stumped for Bradley will point to his individual defensive numbers, most notably those from Synergy Sports. In terms of points allowed per possession, Bradley was No. 1 among all players with at least 250 possessions defended at 0.697 points per play (next closest was old friend Marquis Daniels at 0.707 ppp). What's more, Bradley was also tops in opponent field goal percentage (30.8) and opponent score percentage (31.8). He wasn't perfect, but when he kept his man in front of him, he made things very difficult for that player (whether that was harassing opposing ball-handlers or making shots difficult for shooters).

* Boston's barely-better-than-.500 record certainly didn't help Bradley's cause (he was the only Celtics player to receive a vote, despite being a team that ranked sixth in defensive rating this season). What's more, the fact that Bradley missed the first 30 games of the season likely played a role in driving down his vote total.

* It's a big man's award. Always has been, with Gary Payton really the only exception in the past two decades.

* This is a step in the right direction for Bradley, who tied for 14th place last season with only two points.

* The more important defensive honors await with the NBA's All-Defense teams announced next month. That's voted on by the league's 30 head coaches and is position specific. It will be interesting to how Bradley fares there.

Read on for the full voting and previous year's recipients: