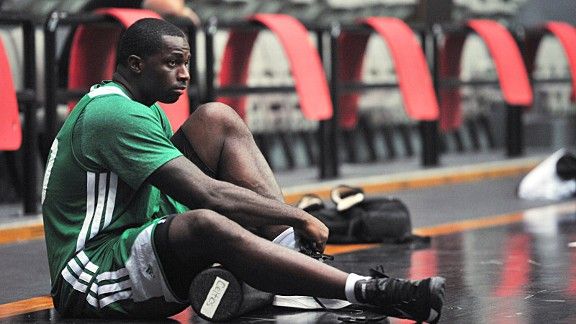 Brandon Bass came on strong late in the 2012-13 season.After the Boston Celtics' 2012-13 campaign met an untimely end, we've busted out our red pens and assigned grades to each player based on their individual performances this season. This is the ninth in a series of end-of-the-season report cards:

Season in a paragraph: Bass opted out of the final year of his previous contract after his first season in Boston, but re-signed with the Celtics on a somewhat affordable three-year, $19.4 million deal (he seemingly could have commanded a bit more on the open market). Despite being shuffled in and out of the starting lineup this season -- including one game during the playoffs -- Bass started 74 of 87 total contests (regular season and playoffs) and overcame a sluggish start to play his best basketball in the postseason. Diminished playing time drove down his regular-season stat line, but Bass carved out a defined defensive-minded role late in the year and used it to excel into playoffs.

Season highlight: With Kevin Garnett sitting out an extended stretch late in the regular season due to left ankle inflammation, Bass took his game to another level and it spilled into the postseason. Tasked with defending Carmelo Anthony in an opening-round series against the Knicks, Bass used his combination of size and athleticism to make everything difficult for a player who finished third in the league's MVP voting. Anthony often got his points, but not without a high shot volume. Rivers went so far as to suggest that Bass played a "perfect" game early in the series and Bass kept his focus on the defensive end.

Season lowlight: Slow out of the gates, Bass got bumped from the starting lineup for short stretches in the first half of the season. Twice rookie Jared Sullinger took his spot -- including just three games into the season, then again in February before a back injury ended Sullinger's campaign -- and Jason Collins, who would be shipped out at the February trade deadline, took over a starting role for a stretch in late December. The soft-spoken Bass endured it all, including another shuffle to the bench when Jason Terry got moved to a starting role for one game in the playoffs to add additional ball-handling to the lineup.

Teacher's notes: The 2012-13 season probably didn't play out like Bass expected, a healthy return for Jeff Green and the arrival of Sullinger muddied up the power forward spot a bit (along with Rivers' desire to take some of the wear and tear off Garnett by pairing him with a pure center like Collins at times). Bass, a consummate professional, rode the playing time wave and still powered through some rocky waters early in the year. Here's what we liked about Bass' season: According to Synergy Sports defensive data, he allowed 0.756 points per play, which ranked him in the 91st percentile among all league defenders. Narrow that list to all players with at least 600 total possessions defended, and Bass ranked third in the league behind only David West and Kendrick Perkins (and one spot ahead of Defensive Player of the Year Marc Gasol). No one is suggesting Bass deserved All-Defensive consideration, but he did an excellent job of limiting opponents and making things difficult (either using his athleticism away from the basket, or his strength to battle with those bigger than him). And his offensive numbers were not that bad, either (0.954 points per play, 71st percentile). But here's a few things we didn't like: Bass' rebound rate was a career-worst 11.2 percent (including a mere 15.2 percent on the defensive glass); his turnover rate spiked (10.9 percent); and he never quite found a way to become a consistent offensive threat, particularly without Rajon Rondo on the floor, as his shots per game fell 3.4 shots from last season. The plus-minus numbers don't help his cause as the Celtics were plus-160 without Bass on the floor; minus-178 when he was. We saw the impact player that Bass can be at the end of the season, but he needs to bring that consistently -- all while finding a way to still get his shots -- in order to maximize his talent.

What's next?: Bass will earn $6.5 million next season, a somewhat economical number if he remains a starter, but it's a bit more daunting if Sullinger can return to starter form after back surgery. Bass has never really thrived in a bench role and clearly benefits from extended floor time. With the starting unit, he's been able to thrive while focusing on his defensive efforts. Off the bench, it might be more imperative to get him going again offensively (at least if Boston's bench struggles to put points on the board as much as it did for most of this past season). If the Celtics are confident in Sullinger's long-term health, it might make Bass a potential trade asset this offseason, but his versatility -- and his shut-his-mouth-and-do-his-job mentality -- is quite a luxury for Rivers.

Don't agree with teacher? Just want to sound off on Bass' 2012-13 season? Leave your thoughts in the comments section.