WINTER PARK, Fla. -- Boston Celtics assistant coach Jamie Young found himself intrigued by the option to join Doc Rivers' staff with the Los Angeles Clippers, but strong roots after 12 seasons in green will keep him alongside incoming coach Brad Stevens. 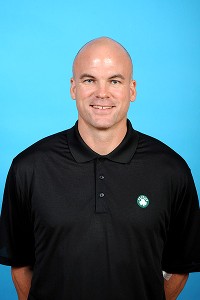 Boston Celtics assistant coach Jamie Young."I had two good options," Young said Saturday as the Celtics held their third day of practice at Rollins College before Orlando Summer League play opens on Sunday. "I had the opportunity to go to L.A. And then it would've been the Fourth of July, [Celtics president of basketball operations] Danny [Ainge] and Brad called me, and made me an offer. This is where I wanted to be, just based on my family [and] being here for 12 years. My wife has a good job in Belmont. L.A. was very intriguing for me. I think it would've been a good opportunity for me. But, at the end of day, just being here for so long, I think that won over."

Stevens phoned Young to stress that he wanted him to aid his transition process and should benefit from keeping one of the team's longer-tenured employees, one who has worn many hats during his Boston tenure (Young spent four years as advanced scout before jumping behind the bench last season, and also served as the team's video coordinator). Young sees an opportunity to help Stevens, a fellow Indiana native, as he gets his feet wet at the NBA level.

"I've known Brad a little bit, not well, but being from Indiana, we know each other a little," said Young. "I've followed his career at Butler, so I know his whole history. He was great. He wanted someone that was familiar with the players we have and familiar with the way things have gone. He needs to be familiar with the NBA and how things run basically on a day-to-day type thing. He wanted me to help the transition.

Added Young: "I look forward to it. I think it's a great opportunity. At the end of the day, it's the Boston Celtics. It doesn't get better than the Celtics, to me at least. Since I've been here, it's always been, 'Wow, I can't believe I work here. It's great.'"

But Young admitted the allure of following Rivers to L.A. was tough to turn down. It won't be easy to watch Clippers games next season and see much of Boston's old staff on that bench.

The Celtics will retain one other coach in second-year assistant Jay Larranaga, who is serving as head coach of the summer squad this season. Asked about his decision to stick around, Larranaga noted, "I had one year left on my contract, so it's not really much of a decision. I'm under contract, and I respect that contract."

Larranaga received some consideration as the team's next head coach and Rivers spoke highly of him upon departure. Will it be awkward for Larranaga now settling in on Stevens' staff?

"I think you always try to focus on the things that you can control, right?" said Larranaga. "So I can control the attitude and my work ethic. I'm going to try and do my best job to do that."

Asked about Stevens, he added: "I've spoken to him a few times on the phone and I'm looking forward to meeting him when he comes down here. He's one of the most successful college basketball coaches ever. What he did at Butler is unprecedented. I'm really excited to get to learn from him and watch him coach at the NBA level."

For now, Larranaga is focused on his job as leader of the summer squad.

"So far so good," he said before the third day of practice leading to Sunday's opener. "Guys have worked really hard, they've had a good spirit. Everybody's brought a good spirit, just working together."