The latest on the Boston Celtics' interest in Houston Rockets center Omer Asik:

Numerous teams consulted by ESPN.com in recent days have said they are convinced the Rockets will indeed go ahead with a trade headlined by Asik before their self-imposed deadline of Dec. 19, with sources saying Tuesday that the Boston Celtics are increasingly active in the Asik talks. 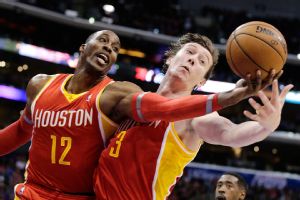 Omer Asik, right, has been unhappy in Houston since Dwight Howard arrived in July.As a result, the Celtics now are widely regarded as the strongest rivals to the Philadelphia 76ers in terms of likely destinations for Asik, with many rival executives expecting the final form of a trade built around the 7-footer from Turkey to feature at least three teams. ...

One possible scenario that has emerged, sources say, is a three-way trade in which Boston lands Asik, Cleveland absorbs the contract of Celtics forward Jeff Green and Houston scores no fewer than one of the future first-round picks it covets for surrendering Asik. Other players would have to be involved in such a trade to make the salary-cap math work, but it's the sort of trade that would fall in line with Cleveland's well-known focus on upgrading its options at small forward.

The Cavaliers pursued Green in free agency two summers ago before Green re-signed with Boston and, as ESPN.com reported Sunday , have shown far more interest recently in finding a new small forward than going ahead with the rumored Varejao-for-Asik swap. ...

ESPN.com reported Sunday that Celtics forward Brandon Bass is another possible trade target for the Rockets, despite the fact that his contract runs for one more year than Hawes' deal.

Sources say the Rockets are conflicted about taking back Philadelphia's Thaddeus Young or the Celtics' Green because each player has two more seasons left on his contract after this one. If either Young (owed $19.4 million in 2014-15 and 2015-16) or Green (owed $18.4 million over the same span) is involved in the eventual Asik trade, Houston almost certainly will need a third team to absorb the contract of either player, since the Rockets need to maintain as much future flexibility as possible to re-sign forward Chandler Parsons, who quickly has blossomed into a key cog in Houston and will command a huge raise when he eventually makes it to free agency.