WALTHAM, Mass. -- Truth be told, Doug McDermott thought the idea was crazy. But when Sports Illustrated calls pitching to put you on the cover of their magazine with a chance to honor one of your basketball heroes, you go along with whatever they say. 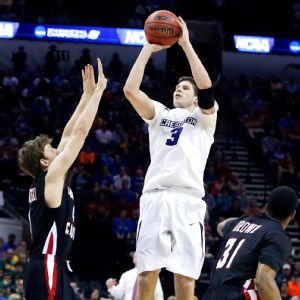 Creighton's Doug McDermott gets off a shot.So there was McDermott, sandwiched by a pair of Creighton cheerleaders for a March issue of SI, recreating the first of 16 covers that Boston Celtics legend Larry Bird appeared on 37 years earlier.

Standing inside the Celtics' training facility on Thursday, Bird's retired No. 33 jersey staring down at him from above, McDermott sheepishly smiled when the topic of the SI cover was brought up.

"I thought they were crazy," said McDermott, the nation's leading scorer last season, who leapfrogged many, including Bird, on the NCAA scoring list and now sits fifth all-time after putting up 3,150 total points.

"I didn’t want to disrespect Larry like that. But I think it was a cool idea just to show some people that were around in that time, maybe, just a flash from the past. I’m glad that I was the one chosen to be able to do that, but obviously there’s never going to be another Larry Bird. It’s cool to kind of have a tribute to him with that cover."

Even at the ripe age of 22, McDermott is too young to have watched Bird play. Bird's final NBA game came on May 17, 1992 and McDermott would have been 4 months old. But that hasn't stopped McDermott from immersing himself in film of Bird trying to absorb all he can from old tapes.

Even before the SI cover, he heard the Bird comparisons. He gets it -- he's tall and white and has a pretty 3-point stroke. Comparisons are unavoidable -- particularly with our propensity to want to find a model for every college player -- and McDermott hears plenty of them, including to former Creighton sharpshooter Kyle Korver.

But McDermott cringes when Bird's name is invariably invoked as part of those comps.

"It’s really not fair," said McDermott. "I don’t think you can compare anyone to Larry Bird. There’s not going to be another one. It’s good to have a guy like that for everyone to look up to, all these young guys, myself included, because it’s the best of the best right there -- him, Magic [Johnson], Michael [Jordan]. You can’t compare guys to those three, I don’t think. I just take pieces of his game and try to apply it to mine."

McDermott is hoping his body of work at Creighton, and what he's shown in these private workouts, is enough to encourage a team to let him build his own identity in the NBA. He's projected as a lottery pick, though he's got potential to go anywhere from the mid-to-late lottery depending on the mock you look at.

McDermott sounds sincere when he says he doesn't read mocks, but notes that his parents, including his father, Greg, who coached him at Creighton, probably do. "I feel like you can’t get too caught up in those because so much can change on draft night," cautioned McDermott.

Fortunately for McDermott, he seems to have put his best foot forward at Thursday's workout -- only his second of the pre-draft process.

Said Celtics director of player personnel Austin Ainge: "He earned his nickname: Buckets. He made a lot of them. The guy’s a great shooter."

The question with McDermott is whether he has the athleticism to play the swingman position at the NBA level. As Ainge noted, "He’s going to have to play a lot of 3 in the NBA. I think any time that transition is going on, you worry about defending the perimeter. I thought he did a good job today. He had a couple of impressive dunks. I think he’s more athletic than people give him credit for."

For McDermott, this is only his second pre-draft workout. He previously visited the Lakers and has at least two more stops scheduled in Charlotte and Sacramento.

McDermott said he's friendly with Celtics youngsters like Phil Pressey and Jared Sullinger. After Thursday's workout, he talked shop with Celtics assistant coach Ron Adams and legend Tommy Heinsohn (who noted how Holy Cross used to play Creighton during his time with the Crusaders).

Looking up at the championship banners and retired numbers, McDermott admitted to feeling the Celtics' mystique inside the practice facility.

"It’s unbelievable," he said. "I want to get my phone out and take some pictures. This is a franchise everybody grows up watching. My grandparents, my dad, this was always their team, so it’s cool to be a part of history, pretty much. Really blessed to be here."

As for those comparisons to Bird, Ainge chuckled when asked about having to live up to those expectations.

"I think that that’s pretty tough," said Ainge. "Larry obviously was one of the best ever. But Doug is a good player, had a great career, and I know he’ll make shots at the NBA level. So he’s got a bright future."