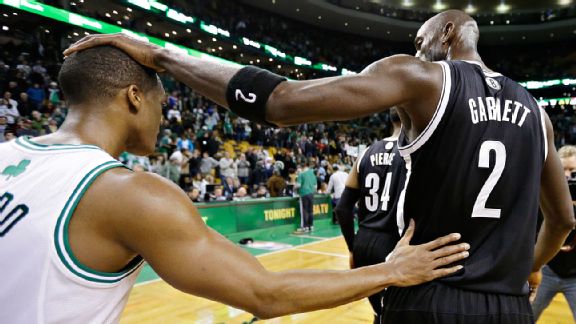 The Celtics' 2014-15 schedule is highlighted by an opening-night visit from the Nets.For the second straight summer, the NBA schedule-makers offered their opinion of the rebuilding Boston Celtics and it's not particularly flattering.

The Celtics are scheduled to play a measly one national TV game when ESPN broadcasts a visit from the Atlanta Hawks on Jan. 14. Boston does not have a single appearance among the 68 games scheduled to be spotlighted on TNT and ABC during the 2014-15 season. Last season, Boston had three scheduled ESPN games.

Here are the other games, dates and numbers that stand out from the release of the team's 2014-15 schedule:

The opener: For the first time since the 2010-11 season, the Celtics will open their season at home with a visit from the Brooklyn Nets on Wednesday, Oct. 29. We had to wait until late January last season for the return of Paul Pierce and Kevin Garnett. Assuming Garnett is back in Brooklyn this season, we won't have to wait nearly as long for his return visit. (Garnett missed the other game in Boston last season due to injury.) For recently acquired guard Marcus Thornton, his first regular-season game in green is likely to come against his last employer. The Celtics catch a two-day break before visiting Houston for the first road tilt of the year in Game 2 of the season (reminder: Boston was 0-15 against Western Conference foes last season).

Cleveland rocks (again): After a busy offseason that included the return of LeBron James, the Cleveland Cavaliers are once again a marquee opponent and may represent the most in-demand ticket for the 2014-15 season. The Cavaliers visit Boston on Nov. 14 (two days after Kevin Durant and the Oklahoma City Thunder pass through) and again on April 12. (Meanwhile, the Celtics visit Cleveland on March 3 and April 10.) If all goes according to plan, that November meeting should be the first time Kevin Love visits Boston since his much-publicized romp through the Hub in early June.

The rivalry: Sure, both the Celtics and Lakers are in rebuilding mode, but those two dates are always among the first circled on the team's schedule. Boston visits Los Angeles on Sunday, Feb. 22 as part of a three-game, post-All-Star/post-trade deadline road trip out west.

Deadline day: Speaking of deadline day (Thursday, Feb. 19), it comes at the tail end of the NBA's new extended All-Star break. Boston closes its first half on Wednesday, Feb. 11 with a visit from the Hawks and doesn't play again until Feb. 20 in Sacramento. Go ahead and start the "Will Rajon Rondo make the trip to Sacramento this year?" quips.

Off on Christmas (again): Further reflecting the team's rebuilding nature, Boston will be idle on Christmas for the second straight season. The Celtics are not among the 10 teams spotlighted on maybe the league's biggest regular-season stage.

Post-holiday treats: The Celtics do have a couple of notable post-holiday tilts as the team hosts Chicago the day after Thanksgiving (Nov. 28) and the Nets the day after Christmas (Dec. 26). Both games are a 1 p.m. tip, as is a New Year's Eve visit from the Kings.

Pierce's return: Old friend Paul Pierce (and Kris Humphries too) will visit only once as a member of the Washington Wizards on Dec. 7. The Celtics visit Washington on Dec. 8 and Dec. 27.

Back-to-backs: A quick count pegs the Celtics with 18 back-to-backs this season (not that it's a huge issue with a younger roster). Regardless, that's down a bit from 20 last season. Heck, Boston had six back-to-backs last November alone but will play barely that number over the first three months of the season. Things ramp up in the second half of the season, including five back-to-backs in March. Boston must capitalize on a forgiving schedule early in the season to build momentum (and confidence).

The finale: The Celtics wrap up the 2014-15 season on April 15 in Milwaukee before an intriguing summer where all the fireworks chatter ought to be rekindled.