Two months after being dealt to the Memphis Grizzlies, Green returned to play his former team on Wednesday at TD Garden. There was no emotional video tribute like those that greeted heroes from the 2008 title team on their first trip back to Boston. About the only hint that Green had ties here came when he got a warm response from the Garden crowd after being introduced last for the Grizzlies prior to the game.

Green finished with 11 points on 4-of-13 shooting with four rebounds, an assist and a steal over 31 minutes, 31 seconds as the Celtics emerged with a 95-92 triumph. Green was minus-8 in plus/minus.

In essence, it was the sort of underwhelming effort that most Boston fans had come to lament when Green was here. Not even playing against his former team could quite light a fire under him.

Before Wednesday's game, wedged in the middle of a batch of locker stalls inside the visitor's locker room, Green slipped some headphones on and, with virtually no emotion, pondered his four years in Boston.

"It was great. I matured and my growth as a person and as a player all happened here," he said. "Playing under [former coach Doc Rivers], he instilled so much in me as far as being aggressive, especially playing alongside [Kevin Garnett], Paul [Pierce], [Rajon] Rondo -- I learned so much. I grew a lot. It all happened here.

"Boston will always hold a special place in my heart as far as going through heart surgery and my growth. The years I had here, it was special."

In the post-big three era, and especially while Rajon Rondo rehabbed from ACL surgery, Green was unable to embrace being the focal point of the team. He struggled with consistency for much of the 2013-14 campaign and, even when he found it at the start of this season, it didn't translate to wins for the Celtics. After Rondo was moved in December, Green got shipped out in January as Boston continued its roster overhaul.

What did Green learn from coach Brad Stevens during their time together?

"Just give everything you’ve got," Green said. "He’s a guy who preaches hard work and he leads by example as far as what he does as a coach. He wants to get better. He’s trying to get his players to play hard and they’ve been doing that these last couple games."

The Celtics are 15-13 since Green was dealt away. Green said he keeps in touch with former teammates, including Avery Bradley (his "brother," they still chat every couple days), but suggested he hasn't been able to follow Boston too closely since the swap. Maybe he simply doesn't want to acknowledge the turnaround in his absence.

"I’ve always thought that Jeff is a good player. I’m happy for him, he’s doing a good job in Memphis," Stevens said. "I think that he’s helped their team. I’m really happy for him.

"I always said that my thing about Jeff was, he is a very good basketball player, he’s an easy guy to coach. But just as impressive, and maybe even more so, was just who he was off the floor and in the community events. When he visited kids in the hospital and those type of things, he’s a genuinely good person. ... Certainly I wish him well moving forward."

Bradley elbows way back into mix

After missing three games due to an elbow strain, Bradley looked like he was making up for lost time. The fifth-year guard hoisted a game-high 17 shots, connecting on seven of nine attempts inside the arc, including a clutch 21-foot jumper in the closing seconds over Marc Gasol to help the Celtics emerge with a win.

"I felt good. My arm is still bothering me, I knew it was and I know it is for a while," said Bradley. "I just can’t think about it, I just have to go out there and play."

Turning to his big late-game shot, Bradley added, "I was just going to clear out and try to score on Courtney [Lee] but Tyler [Zeller] came up and he set the screen and got the switch, so I was able to knock down a big shot. Right when it left my hand I knew it was in, I could feel it."

Bradley missed Boston's recent road trip after he hyperextended his left elbow while getting snagged on a screen during last week's win over the Utah Jazz. He wanted to join the team on its recent three-game road trip, but was advised to use the time to heal.

"[Joining the team] was something that I wanted to do, but obviously the doctors and [team trainer Ed Lacerte] decided it would be best for me to stay back, so that’s what I did," Bradley said. "I stayed back and got a chance to ice and work on my body, my entire body."

Bradley was informed he made four straight shots after returning to the Utah game after the injury occurred last week, but said the pain of the injury didn't set in until the next morning.

"I think it was adrenaline. All my teammates said the same thing," Bradley said. "After the game, once my body relaxed, I felt the pain, but like I said, I feel a lot better and I’m just excited that I’m back on the court."

Olynyk said Whiteside apologized via text message after getting his number from a mutual acquaintance in the aftermath of the incident.

"I didn’t really know what happened," Olynyk said. "Seeing it on film, I think he just lost his cool for a split second, which is unfortunate, but nothing against him. He’s a good guy, and I wish him the best."

• Courtney Lee noted he "got a raise" when he was traded from Boston to Memphis in January. An unknown trade kicker? "No state taxes [in Tennessee]," quipped Lee.

• Marcus Smart received his Rookie of the Month award from February before Wednesday's game. ... 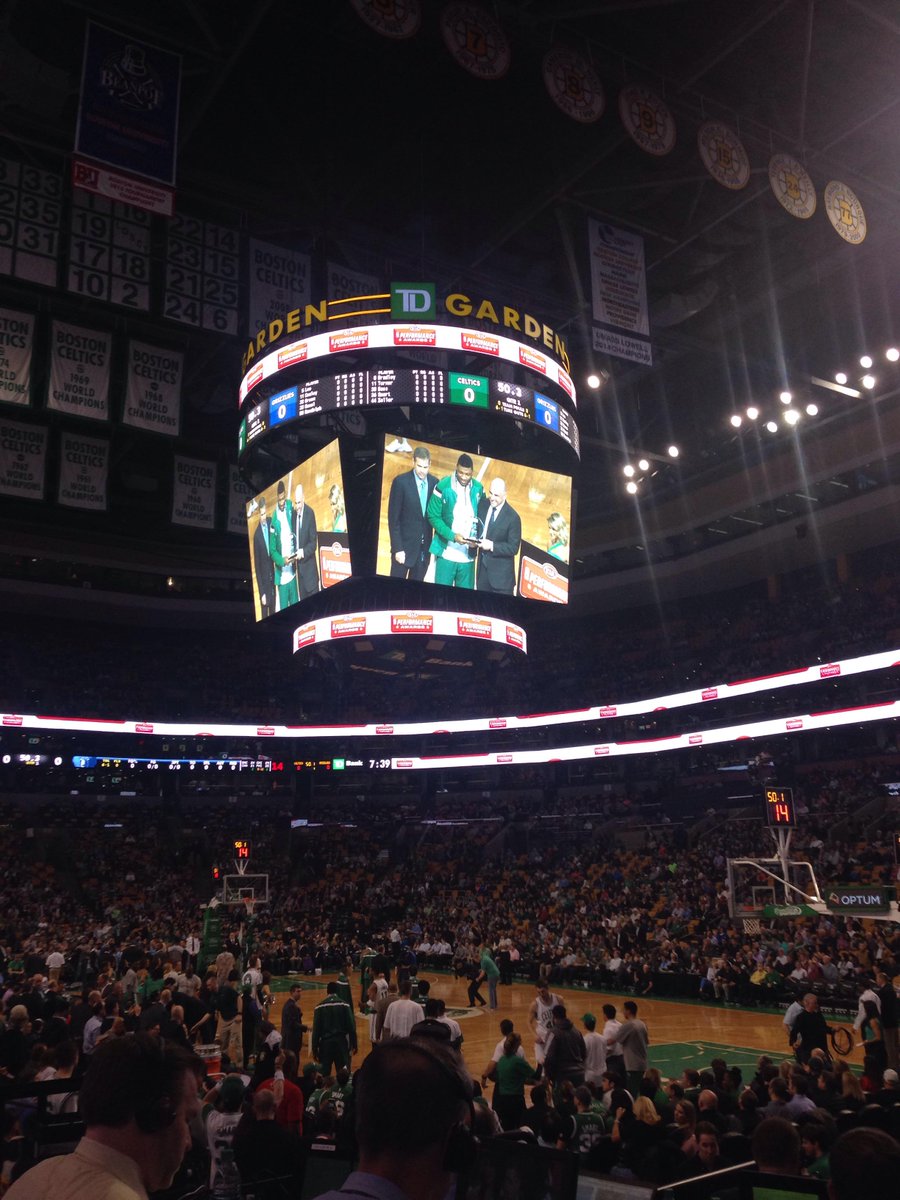