WALTHAM, Mass. -- The general rule in sports is that you don't acknowledge a milestone until it occurs (think pitchers getting the silent treatment during no-hit bids). But members of the Boston Celtics organization, perhaps trying to test Jamal Murray's mettle, alerted him that he was within striking distance of a team record during Wednesday's pre-draft workout.

Murray, a 6-foot-5 guard out of Kentucky, then calmly drained eight of his final 10 3-point attempts, finishing with 79 makes out of 100 and besting the Brad Stevens-era pre-draft record of 77, set earlier this spring by Gonzaga's Kyle Wiltjer. 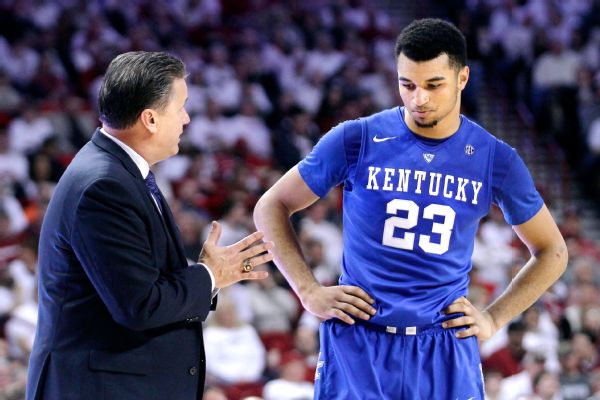 Knowing the record was obtainable entering the final of 10 spots -- shooting twice from five different locations beyond the 3-point arc -- only fueled the hypercompetitive Murray. Last month, Murray requested multiple attempts at the grueling star drill and ultimately set a new benchmark by making 25 out of 27 attempts in the timed two-minute drill. (Boston's 100-shot marathon was untimed, but Murray noted he did not take breaks between shot locations.)

Murray said he has always had that thirst for competition.

"As a child, I was competitive in whatever it was -- first one to eat your wings, first one to run to the door. In everything we were competitive," said Murray, who is still a bit of a child by NBA standards, having turned 19 in February. "I always wanted to have the edge. My dad taught me a lot of meditative techniques. I used that to my advantage."

Murray detailed how he typically meditates before games and leaned on those principles after what he suggested was a rocky start to the shooting drill (he fretted initially after making only 70 percent, but calmed himself as the drill continued).

Seated in a chair inside the Celtics' Hall of Fame room at the team's practice facility, Murray calmly and comfortably fielded questions. Asked if he thought he was the best player in this year's draft, his competitive nature took over again.

"I think so," Murray said. "That's not a knock on anybody, I'm just looking back on the work I've put in, how far I've come, how quickly I learn, how quickly I adapt to my surroundings and how easy I fit into a team. I believe I'm the best player in the draft, but every team needs what they need."

The Celtics need shooting. Badly. Boston ranked 28th in the league while connecting on a mere 33.5 percent of attempts beyond the 3-point arc this season. This while hoisting the third-most 3-pointers in the NBA, trailing only the Cleveland Cavaliers and an Atlanta Hawks team that knocked the Celtics out of the playoffs in the opening round.

In the postseason, Boston shot just 27.5 percent beyond the 3-point arc while being eliminated in six games. It's apple to oranges, but it's worth noting that Murray's 79 3-pointers on Wednesday were more makes than 12 of the 16 players who appeared in a game for Boston last season.

Murray shot 40.8 percent beyond the 3-point arc in his only season at Kentucky (this while putting up 7.7 attempts per game). While it's unclear exactly which guard position he'll settle into at the NBA level, he's undeterred by Boston's current depth at the guard spot.

"[Competition is] only going to make me better," Murray said. "Going against guys like Avery Bradley, Isaiah Thomas -- small defensive guards. Marcus Smart is always very physical and can help me, offensively. I think it'll be a great experience for me no matter what team I go to."

Murray stressed that the right situation is more important, ultimately, than being the No. 1 pick.

"I just want to go to the right team. The team that wants me," he said. "The team that believes in my potential."

Murray knows he's unlikely to stay on the board very long on June 23. He has scheduled only four workouts -- for the Celtics, Phoenix Suns, Minnesota Timberwolves and New Orleans Pelicans, teams at Nos. 3-6 in the draft.

He did not take part in a group workout and competed individually Wednesday. He said it was his agent's decision to approach pre-draft workouts that way and likes the spotlight it puts on him.

Murray seems to have a good sense of humor. The Canadian was asked which players he watched growing up north of the United States border. "I watched a lot of Wayne Gretzky -- nah, I enjoy watching Kyrie Irving, Steph Curry. Brandon Roy, Penny Hardaway, those old guys, [Tracy McGrady], those tweeners who can handle it and score," Murray said.

Now he's ready to compete against -- and score on -- some of the contemporaries he mentioned. That competitive spirit shining through again.

Said Murray: "I believe I can score on anybody."