Jaylen Brown's debut includes high energy, a missed dunk and short shorts
6yChris Forsberg
Which NBA front office should you run? Take our quiz to find out!
Los Angeles Lakers
1dKevin Arnovitz
Jazz name Celtics assistant Hardy new coach
Utah Jazz
3dTim MacMahon
They said it!: Kevin Durant defends his legacy and more Quotes of the Week
7dESPN.com
Stevens to Tatum after Finals: Get some rest
10dTim Bontemps
Father's Day in the NBA: 'We talk about the games, and he just helps me'
12dBrian Windhorst
Oct 27, 2016

Less than four minutes into Brown's first NBA shift, he got behind the Nets' defense and stormed the baseline. Hamilton, a 7-footer, shuffled to the edge of the charge circle and tried to deter him, but Brown exploded off the blocks and reached back with the ball palmed in his right hand for a tomahawk jam. Hamilton absorbed a knee just north of the groin, Brown came up short on the dunk attempt and the brief burst of pain likely spared Hamilton a lifetime on Brown's first NBA poster.

"Nothing against Justin Hamilton, man, I’m just out here playing basketball, trying to make a name and trying to be the best version of myself and my team," Brown said.

Just two days removed from his 20th birthday, Brown, the No. 3 overall pick of the 2016 draft, was the first player off Boston's injury-depleted bench during Wednesday's season opener. He put up nine points, two rebounds, two blocks, a steal and an assist in his 19 minutes, 27 seconds on the floor in the Celtics' 122-117 triumph over the Nets at TD Garden.

The Celtics made things a bit more interesting than they needed to be down the stretch, and Brown and the second unit couldn't hose off a Nets team that caught fire late in the fourth quarter, forcing Celtics coach Brad Stevens to bring his starters back. But on a night in which Isaiah Thomas looked very much the All-Star of last season (25 points, 9 assists) and Al Horford dazzled with his own unselfish play (11 points, 6 assists, 5 rebounds), Brown still managed to distinguish himself with his raw talents.

Shortly after he checked in, Brown took a wrap-around pass from a driving Thomas and muscled his way through Luis Scola for his first NBA bucket. He showed some nerves when he fumbled a bounce pass from Horford in transition for a turnover a short time later, but came back with the strong baseline attack on Hamilton.

Asked what went through his mind on the dunk attempt, the first of two instances where he nearly dunked on Hamilton in the first quarter, Brown downplayed the moment.

"Nothing. It was just read-and-react," he said. "I’d seen the play, I was in the present, and I tried to make a play. That was it."

He made other plays on this night: A couple of blocks, twice denying Joe Harris near the basket, and a highlight-worthy assist in transition where he threaded a bounce pass to a streaking Thomas for a layup.

"He was open, he was running ahead. I made the pass, and he made a crazy layup and it went in," Brown said, shrugging. "That’s Isaiah, though, for you."

It's hard not to notice Brown when he's on the floor. Despite all of their success the past two seasons, the Celtics have operated with a low-to-the-ground attack. The Celtics fell in love with Brown in the pre-draft process, not only because of his NBA-ready 6-foot-7 frame, but also for his ability to play above the rim, a dynamic the team was sorely lacking.

It was also hard not to notice his shorts, which were cropped tightly above the knee. After Wednesday's debut, he was asked if he was trying to bring short shorts back. 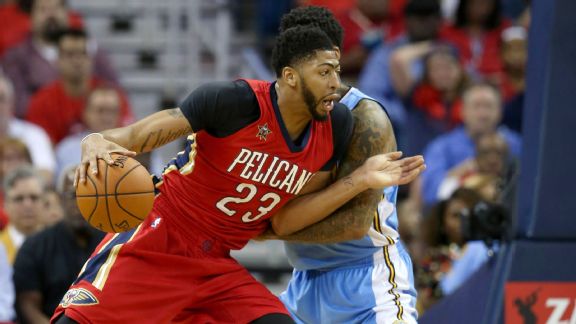 On the second night of the season, Anthony Davis went for 50, filled the box score in historic fashion ... and lost.

Standing nearby at his locker, Thomas interjected, "I would!"

Brown relented. "I guess mine are pretty short."

It's somewhat appropriate that Brown made his NBA debut against the Nets, the team whose pick the Celtics used in June to draft him. While at the free throw line late in the first quarter, a brief chant of "Brooklyn's draft pick!" broke out.

Boston has already collected two picks from Brooklyn for that swap that sent out Paul Pierce and Kevin Garnett, selecting James Young at No. 17 in 2014 and Brown at No. 3 in June. The Celtics can swap picks with the Nets this season, something that should help them land another high lottery selection, and they own Brooklyn's 2018 pick.

The book on Brown coming out of college was that he would take time to develop at the NBA level; indeed, projections were lukewarm that he could translate at this level. Early returns suggest he'll fit in just fine at the pro level.

Make no mistake, Brown wasn't perfect Wednesday. He left his feet too soon while contesting at times, and you can see him racing to get to the right spots on both ends of the court. Neither he nor any of his second-unit teammates could stop the Nets from whittling what had been a 23-point deficit down to three points late in the fourth quarter.

When asked to assess his debut, Brown said, "Pretty good. We gotta finish out games a little bit better, but a win is a win."

Said Stevens: "I thought he had a lot of good moments. I thought that Jaylen did a pretty good job for a first game."

Maybe most important was that Brown looked like he belonged, no small feat for an NBA player who was a teenager at the start of the week. Told he didn't look nervous on the court, Brown joked that he must have hidden his emotions well.

"On a scale of 1 to 10? About maybe a 7 or 8," Brown said of his first-game jitters. "Just opening night, starting your career, you’re anxious, and you just want to come out, you have a lot of energy, and it’s hard trying to suppress some of that energy."