BOSTON -- There are times when Boston Celtics swingman Jae Crowder talks after games and, if you shut your eyes, it's eerie just how similar he can sound to Kevin Garnett. Just the other day, Crowder posted a picture on Instagram that featured himself and Garnett with the caption, "1 of my idols."

It's unfair to compare anyone to Garnett, but if this young Celtics team has a conscience, a voice that's eager to speak up when things go awry, it's typically Crowder. And on the heels of Wednesday's 121-114 loss to the Detroit Pistons, you could sense the frustration in Crowder's voice as he tried to pinpoint the reasons Boston couldn't hose off a Detroit team that shot a blistering 55.2 percent at TD Garden.

"I think we have to get a little more nastier on the defensive end," Crowder said. "Not let a team come in and get comfortable. It's not been an ongoing thing; it happened today and it happened a couple games but, for the most part, we've been trying to impose our will first. That's what our mindset is and that's the mindset going forward."

Crowder's frustrations are almost certainly the product of a Boston team that's eager to launch. Boston was eaten alive by the injury bug at the start of the season, its defensive rating plummeted to the basement of the league, and only recently has Boston been able to restore its defense-first identity as the team gets healthier.

Winners of seven of their previous 10 entering Wednesday's game and with an agreeable schedule in the offing, it felt like a chance for the Celtics to finally distinguish themselves in the crowded Eastern Conference. Instead, Boston watched Detroit, playing the second night of a back-to-back set, come in and scorch the Garden floor, which included shooting 45 percent from beyond the 3-point arc.

Yes, the Pistons capitalized on the Celtics' rebounding deficiencies, with Andre Drummond registering eight of his 17 rebounds on the offensive glass and utilizing putbacks to aid his 20-point night. But it was the 3-pointers from Tobias Harris (21 points) and the midrange assault of Ish Smith (19 points) that really frustrated Boston as Detroit consistently made tough shots.

And just when it seemed the Pistons had hit a wall in the fourth quarter and the Celtics rallied ahead with an 11-0 run, Detroit responded with a 9-0 burst of its own to surge back ahead.

"Tough loss tonight. I didn't think we were gonna lose this game tonight," Crowder said. "We had injuries early [in the season] and we're just trying to figure it out."

When pressed on his seemingly vexed demeanor, Crowder stressed that he's happy with Boston's improvements lately but simply frustrated by a defensive dud. As with Garnett, these bumps in the road simply don't sit well with Crowder.

"We lost today. That's not a good feeling," Crowder said. "I'm good though. We lost, I'll go back and watch it. We got Sacramento coming in here trying to beat us and we'll be ready for them.

Both Celtics coach Brad Stevens and Boston big man Al Horford showered Detroit with praise for the way its offense was clicking. Pistons coach Stan Van Gundy called it Detroit's "best offensive performance of the year," and the Pistons -- 1-8 on the road before Tuesday night -- reveled in beating playoff-caliber foes on consecutive nights.

The loss spoiled another brilliant offensive outing for Isaiah Thomas, who scored a game-high 27 points for the Celtics. His most impressive moment might have been the one make that didn't count. After being fouled on a drive to the hoop, Thomas threw up a rainbow lob while going out of bounds on the baseline and the ball -- defying all laws of physics -- ticked off the backboard and in. The Celtics lobbied for continuation -- maybe based of the sheer improbability of the shot -- but were denied.

The Pistons' degree of difficulty was notably lower on most shots but that didn't stop them from coming up with big makes every time the Celtics tried to generate some momentum.

"You have to give them credit because they hit some tough, tough shots," Horford said. "I feel like our guys were there. The way they were shooting, there was just no room for error. We have to look at the film tonight and just see how we can be better and we can impact those shots because they had their way with us from the beginning. They just did."

The only other area on the box score that left Stevens uncomfortable was seeing only five shots attempts for Horford, who hadn't attempted fewer than eight in a game this season. Only 15 times in his 585-game career had Horford attempted five or fewer field goals when playing 30-plus minutes. 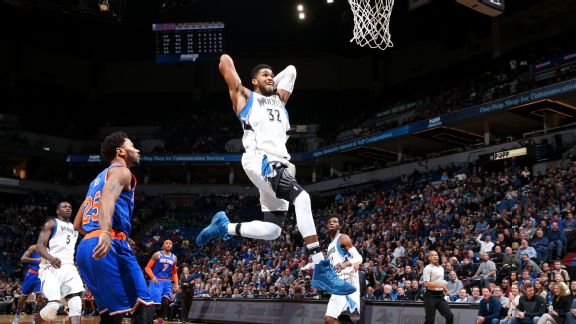 Karl-Anthony Towns dropped 47 points on the Knicks in a close loss. Here's what his numbers say.

"That's the first thing I saw when I looked at the stat sheet," Stevens said. "It's not enough, I know that. So we need to do a better job of making sure that we help put him in position to be successful."

Horford noted the Pistons doubled him often, forcing him to pass out of the traps while also switching to disrupt his play in the pick-and-roll. But the Celtics were adamant they need to get Horford involved more.

"That's unacceptable," Crowder said. "Starting from my point guard, starting with all the guys around him, we have to get [Horford] the ball in spots that we know he can help our team. That's very unacceptable."

There were positives beyond Thomas for Boston: Kelly Olynyk matched his season high with 19 points on 7-of-9 shooting over 26 minutes and Crowder was able to play 35-plus minutes after being on a minutes restriction until this week while working his way back from an ankle injury.

But the Celtics are left staring at a 10-8 record and find themselves lumped among five East teams with 10 victories. It's much too early to obsess about playoff positioning, and yet it's hard not to look at the logjam and fret wins that got away, particularly after Boston finished tied with three teams last season and a tiebreaker determined their playoff seeding.

The Celtics were hyped as the possible No. 2 team in the East entering the season but have yet to play like it. Crowder's eager for his Celtics to launch. But there simply hasn't been enough consistency, particularly on the defensive end, for this team to take flight.