ORLANDO, Fla. -- Despite his obvious athleticism, if there's one thing that Boston Celtics rookie Jaylen Brown has learned early in his NBA career, it's that dunking on an opposing player in games that matter is no easy feat.

In June, Brown, 20, declared himself "ready to rip somebody's head off" immediately after the Celtics drafted him with the No. 3 pick. Despite a few loud dunks in summer league, his quest for basketball decapitation has been largely stunted by uncooperative defenders.

Until Wednesday night in Orlando.

Racing free into the paint when his defender whiffed on a steal attempt, Brown soared over Orlando Magic 7-footer Nikola Vucevic and threw down an emphatic tomahawk slam that left the Boston bench stumbling onto the floor in celebration.

After a couple of near misses this season, including on opening night when he came close to a poster dunk on the Brooklyn Nets' Justin Hamilton, Brown produced what teammates are certain is just the first entry in a future YouTube dunk compilation.

"Just know that you’re going to see a lot more of that in his career," Avery Bradley said. "Jaylen’s a really good player, and he gets us going."

Brown's dunk, as he would later admit, was largely inconsequential in Wednesday's game. The Magic shot 80 percent from beyond the 3-point arc in the first half, and Brown's two first-half dunks did little to cool them off.

But on a night the Celtics played without All-Star point guard Isaiah Thomas (groin strain), it was the energy and effort that younger players such as Brown contributed that helped the Celtics run away with a 117-87 triumph at the Amway Center.

Brown finished with 13 points, the second-highest scoring output of his pro career, in 22 minutes off the bench. After his minutes had evaporated in late November, Brown has shown the sort of progress that should give coach Brad Stevens more confidence to lean on him again, if for no other reason than the Celtics don't have anyone like Brown, whose athleticism distinguishes him on a team full of players who play low to the ground.

"I think that [Brown's dunk was] just kind of an energy-raiser for everyone," Stevens said. "I don’t really care about the dunk stuff, right? But I think it does raise the energy level in the building, and it's certainly like, ‘Wow, what an athlete,’ when he took off and threw that down. But it’s still worth two, and you gotta play the rest of the game."

Brown echoed his coach's sentiment after Wednesday's win and admitted that, after a few near misses trying to dunk on opponents, he even surprised himself by completing the slam.

"I didn’t expect [Vucevic] to jump, nor did I expect myself to dunk it," Brown said. "When it happened, I was just as surprised as everybody else."

When Orlando's Jodie Meeks whiffed on intercepting Tyler Zeller's cross-court feed, Brown went strong with a left-hand dribble and got into the paint. Vucevic shuffled away from Kelly Olynyk, Boston's floor-stretching big man, and leaped to contest Brown at the top of the charge circle. It did nothing to slow Brown, who soared then arced his back before a strong right-handed flush.

On the dunk, Brown appeared to scratch Vucevic near the eye -- which seemed to be the least of the big man's concerns at that point -- and the injury forced the Magic to call a timeout and allowed Boston's bench to smother Brown in celebration.

The Celtics also received quality minutes from backup point guard Terry Rozier, who scored a career-high 16 points over 26 minutes. The effort of Boston's youngsters wasn't lost on Al Horford, who quarterbacked much of Boston's second-half attack while handing out eight assists as the ball went through the post in the absence of Thomas.

"It’s hard as a young player to come in and kind of find yourself on a team," Horford said. "Those guys are really hard workers, and I think that, as the season goes on, they’ll become more comfortable with what we’re trying to do."

Brown, with his early '90s throwback look that includes short shorts, compression shorts and a hightop fade, came roaring out of the gate this season, highlighted by a 19-point effort during his first start against LeBron James and the Cleveland Cavaliers in early November. But like most rookies, Brown came back to earth and was soon limited to bite-sized chunks of minutes.

Brown might have re-established himself as a rotation player on Boston's three-game road trip, averaging nearly 19 minutes as Boston went 2-1, with the only loss being a heartbreaker in Houston. Brown is playing with a different confidence the past three games and admits he's simply more comfortable now.

"I feel like my teammates are trusting me more; I'm getting more trust from the coaching staff," he said. "And just coming out, trying to make plays and be in the right spots and just play some good basketball."

For the year, Brown is averaging 5.3 points, 2 rebounds, and 0.7 assists in 13.9 minutes a game. The Celtics own a net rating of plus-1.1 when he's on the floor, and while that ranks near the bottom among regulars, it's slightly better than Thomas at plus-1. 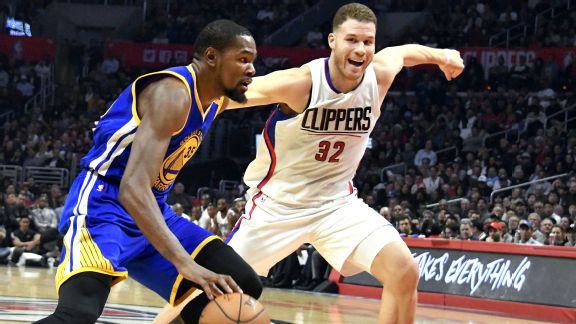 Even with Steph missing all his treys, Golden State swatted away the Clippers.

Brown has been credited with seven dunks this season, but Wednesday's tomahawk was the first that was truly contested. He added a two-handed slam off a cut, but Vucevic wanted no part of contesting it the second time around. Brown did get past James in Cleveland for a baseline slam, but this was clearly the best dunk of the batch so far.

The more encouraging sign if you're Stevens is that Brown has been excellent at the other end. Boston's defensive rating is 101.5 when Brown is on the floor, nearly three points lower than the team's season average. What's more, the NBA's defensive tracking data suggests that Brown is limiting opponents to 35.2 percent shooting overall, a whopping 8.4 percent below those players' season average. A teenager just a month ago, Brown's NBA-ready body has allowed him to get physical with more experienced players, and he has limited opponents to 47.4 percent shooting inside of 6 feet, or 21 percent lower than those players' season average.

Brown ranks in the 93rd percentile among all defenders while allowing just 0.716 points per play, according to Synergy Sports data. Narrow the field to all players who have defended at least 95 total plays and Brown ranks 9th in the NBA out of 268 qualifiers. It’s a small sample, but an encouraging one. When Brown is in the right spots, he’s a capable defender.

There are strides for Brown to make at both ends, and he's eager to put his stamp on games for more than just dunks.