CLEVELAND -- More than an hour after the final buzzer of Thursday's 124-118 loss to the Cleveland Cavaliers, long after most of his teammates had boarded the team bus for their flight back home, Boston Celtics point guard Isaiah Thomas emerged from the visitors locker room at Quicken Loans Arena still dripping with disappointment.

A somber Thomas didn't care to talk much about Boston's late-game rally from a 20-point deficit, which culminated with Jae Crowder's missing a quality look at a potential go-ahead 3-pointer with eight seconds remaining. Thomas was still smarting over how the Celtics had improbably come out a step slow and dug themselves a deep hole because of multiple defensive breakdowns that allowed Cleveland to hang 101 points over three quarters.

And, painful as it might have been to admit, Thomas acknowledged the obvious about a Celtics team that fell to 0-9 against teams with better records entering Thursday's game.

"We're not on that level yet," he said. "We're not on Cleveland's level, so we got work to do. And we gotta figure it out.

"The real good teams, you make a mistake and they capitalize on it, whether it be the Cavs, the Warriors, the Spurs -- those type of teams don't let you live when you make a mistake. We're not on that level yet."

The Celtics are now 0-3 against the Cavaliers and Raptors, the two teams ahead of them in the Eastern Conference. Yet, Boston is 14-3 against the rest of the conference and is tied with Charlotte for the third-best record in the East. Despite a couple of encouraging recent wins over the likes of the Memphis Grizzlies and New York Knicks, the Celtics have still yet to defeat one of the league's true title contenders.

There were two losses to Cleveland, San Antonio, and Oklahoma City. The Golden State Warriors ran away in the second half when they visited Boston in November and the Celtics missed an opportunity to steal a win in Houston in early December.

So despite some good vibes from recent successes, including winning six of their previous seven games before the loss to the Cavs, the Celtics were left with a reminder that there is still work to be done to get this team to the next level. 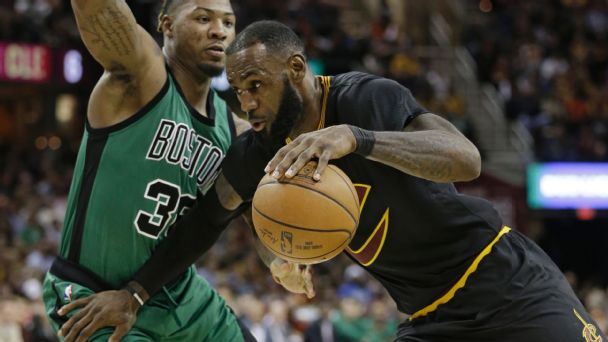 LeBron and the Cavs fought off the Celtics' fourth-quarter comeback in Cleveland.

Alas, Thomas was merely a spectator as a bench unit featuring Marcus Smart and Tyler Zeller fueled a rally from the 20-point deficit Boston faced with a little more than a quarter to play. Thomas checked back in with Boston down six with 4 minutes, 33 seconds remaining and helped put it in position to steal a win. But the Celtics simply couldn't get the defensive stops when they needed them most, especially after pulling within a point on four different occasions over the final 2:15.

Crowder got an excellent look but was just a bit strong with his late 3. Celtics coach Brad Stevens downplayed the late rally, however, and was obviously frustrated by his team's defensive miscues over the previous three quarters.

"That was disappointing, how we played, I thought, for the better part of the first three quarters," he said. "The fourth quarter, our guys did a great job of coming back, but I thought we were disappointing [over the] first three.

"I just thought we weren't connected on defense at all. And if they have 100 after three quarters, you don't have a real chance to beat them. Now, we got lucky and we had a chance at the end because our guys played really hard and figured out a way, and the bench was great."

Celtics players couldn't pinpoint the reasons for the defensive breakdowns but used familiar crutches like suggesting that communication was lacking. Stevens said simply, "We weren't connected or locked in defensively, in my opinion."

Thomas said the team didn't stick with the scouting report that coaches detailed at Thursday's shootaround.

"We had a pretty good scout. It had something that we wanted to do and, when we did it, we were successful," Thomas said. "And when we didn't, it showed."

Given an opportunity to focus on a quick turnaround with Friday's visit from the 10-win Miami Heat, Thomas passed.

"I mean, it's cool, but we got a lot of of stuff we need to fix," he said. "I mean, that's players and everybody included."

Celtics big man Al Horford will hear some grumbles after a quiet night in which he finished with only six points on 3-of-9 shooting. He was a minus-18 in plus/minus over 29 minutes. Horford had some excellent defensive moments, including a big first-half block on LeBron James in transition. Stevens downplayed Horford's quiet offensive night while noting that offense wasn't an issue for a team that put up 118 points.

For a Boston team that fancies itself as defense first, that side of the ball must be more consistent against top competition.

Crowder said he wasn't necessarily frustrated by losing to another quality opponent, just losses in general. But it was obvious the Celtics missed an opportunity to distinguish themselves a bit against the team everyone is chasing in the East.