BOSTON -- Boston Celtics guard Isaiah Thomas repeatedly has suggested this season that "the fourth quarter ain't for everybody." The insinuation is that only the league's very best players step up when it matters most.

Thomas isn't just the NBA's leading fourth-quarter scorer. In averaging 10.1 points per game in the final frame this season, Thomas owns the best fourth-quarter scoring output in the NBA over the past 20 years. He has been better than Tracy McGrady in 2003 (8.6). Better than LeBron James (9.1) in 2008. Better than Kobe Bryant (9.5) in 2006. In fact, his nearest competition is Oklahoma City's Russell Westbrook (9.6) this season, and Thomas leapfrogged him earlier this month.

On Monday night, Thomas scored 17 of his game-high 35 points in the fourth quarter as the Celtics topped the Charlotte Hornets 108-98 at TD Garden. Because Thomas didn't attempt a single free throw -- a rarity in these parts -- fans at TD Garden simply serenaded him with chants of "MVP" each time he touched the ball late in the game. Thomas made 14 of his 25 shots, including seven of a career-high 15 3-pointers he hoisted.

Thomas was surprised to find out how many triples he took but not surprised by his final-frame output. For a player who scored a franchise-record 29 points in the fourth quarter of a win over the Miami Heat in late December, these sort of fourth quarters have become the norm.

This is the eighth time this season that Thomas has scored at least 15 points in the fourth quarter. According to ESPN Stats & Information, Westbrook is second in the league with just four such games.

Even his teammates have started to marvel at what's becoming a nightly display, with Thomas often pointing at his wrist as if to suggest the fourth quarter is his time.

Thomas not only leads the East in scoring but is tied for third overall in the NBA with James Harden at 28.4 points per game -- this while averaging 2.6 fewer minutes per game than Harden. At 40.2 points per 48 minutes, Thomas is second only to Westbrook (42.7).

How does Thomas explain his fourth-quarter dominance?

"I’ve always wanted that moment," he said. "Growing up, always seeing the best players take over in those moments, whether it be Kobe [Bryant], Allen Iverson, [Michael] Jordan, and they just treated it like it was just another possession, another game. That’s how I feel.

"When I’m out there, I just want to make plays and be aggressive. And, like I said, I want that moment. A lot of guys don’t want to take the big shots, they're scared to try to make a big play because they might turn it over or miss the shot. I work too hard not to take advantage of those moments." 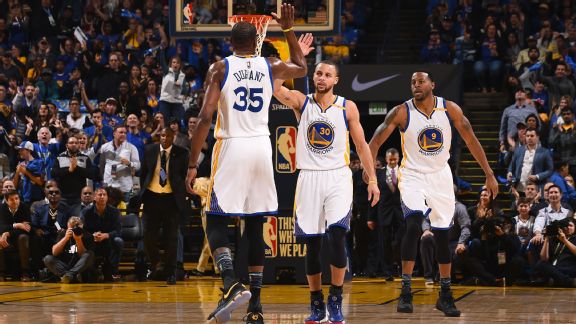 After stumbling against the Cavs lately, the Warriors unleashed a beatdown.

During an Instagram Live session before Monday's game, Thomas made a startling revelation: He has pondered changing his jersey number from 4 to 11. It turns out he has never been a big fan of the No. 4, but it was one of the few low numbers available when he got traded to Boston. Evan Turner was wearing No. 11 when Thomas arrived, but it is now vacant.

Thomas acknowledged he's hesitant to switch numbers after this season, if only because of all the people who have spent their hard-earned money on his No. 4 jersey. It also was noted how Thomas might want to embrace No. 4 considering his newfound reputation as "The King in the Fourth" from his final-frame outbursts.

"You’re right," Thomas said with a big smile. "I’ve got a lot of thinking to do."

Of course, some of the greatest players in league history have changed their numbers. Thomas had name-checked Jordan (23 and 45) and Bryant (8 and 24). A new number might usher in a new era for Thomas, whose exploits finally are starting to draw national attention. He'll enter the final year of his bargain-basement contract next season -- he's earning just $6.6 million this year, and that will drop to $6.3 million in 2017-18.

Thomas' play has been strong enough to earn him serious consideration for a starting role in February's All-Star Game. Thomas has said it's a goal of his but knows it's largely out of his control, even after the Celtics unleashed an all-out social media blitz aimed at trying to improve his standing in the fan vote, which closed Monday night.

"It would mean a lot. That’s one of my goals," Thomas said. "That’s what I’ve worked for. I think I put myself in a good position to be named a starter, but we’ll see."

On a night he outdueled another of the East's top point guards in Kemba Walker, Thomas has cemented his All-Star status. The Celtics' recent surge in the standings, when they've distinguished themselves as one of the top teams in the East, should further help his case.

And it's certain he has earned the votes of his teammates.

"[Thomas] really just keeps elevating his game and really making it look easy out there the way that he’s been playing," said Celtics big man Al Horford, a four-time All-Star. "This has been an amazing rhythm he’s had since the injury. It’s great to see."