BOSTON -- Boston Celtics point guard Isaiah Thomas, who had scored 41 and 44 points in his past two games, said he was unaware that no player in franchise history had ever scored 40 in three straight games until he reached the locker room following Friday's 113-107 win over the Los Angeles Lakers.

FRIDAY NIGHT IN THE NBA 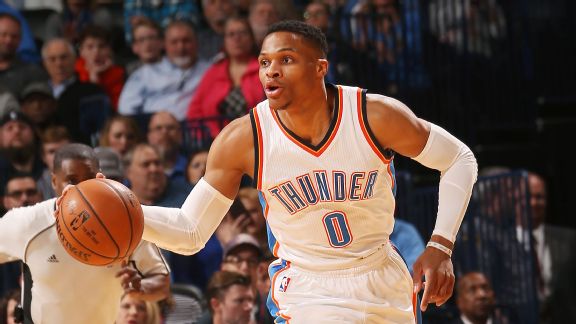 Yes, there was another triple-double, but it was alternating between facilitator and hero that made Russell Westbook's Friday great for the Thunder.

• Russell Westbrook paints another masterpiece
• Red-hot Isaiah Thomas: 'You can't put my name with Kobe'
• In current and all-time battle, Celtics ahead of Lakers
• Rockets use Harden plus intangibles to beat Bulls
• Bulls miss Jimmy Butler's presence late in OT loss to Rockets

Thomas's point total for the night: 38.

"I didn’t know about it, or I would have shot the last shot," joked Thomas, who scored 17 of his points in the final quarter but simply watched as the Celtics dribbled out the clock in the final seconds of the win.

After dissecting every defense the Lakers threw at him in the final quarter, Thomas was asked if he's filling the star void in this rivalry since Kobe Bryant retired after last season.

"You can't put my name with Kobe," Thomas said. "Maybe 15 years from now, hopefully. But I'm not close to him."

Thomas' scoring outbursts used to be noteworthy because he's only 5-foot-9. But he has muscled his way into the MVP conversation alongside James Harden and Russell Westbrook because what he's doing is notable for a player of any size.

"It has nothing to do with his height," Lakers forward Larry Nance Jr. said. "He's one of the best players in the league, period."

Thomas might have missed out on setting a franchise mark for 40-point games Friday, but he still has a chance to etch his name among Boston legends for other offensive streaks. Thomas has scored 35 points or more in Boston's past four games, the longest streak by a Celtics player since Paul Pierce did it four times in 2001.

The Clippers' Pierce, who is in the last season of his storied career, plays his final game at TD Garden on Sunday and will get an up-close look at Boston's new go-to guy. Thomas was told that Pierce had showered him with praise in advance of Sunday's game, including telling the Boston Globe that Thomas is a "championship-caliber player."

"That means everything," Thomas said. "From a first-ballot Hall of Famer, a Celtics legend, to say that about me, that means a lot. Like I always say, I don't care what anybody says but my peers and the people who did it before me. For a guy like that to say that, that's crazy. I'm going to try to find his jersey so I can get it signed."

Maybe Thomas can finagle another sit-down chat like the one he had when Bryant played his final game at TD Garden last year. Thomas came away from that meeting with added motivation to take his game to another level and has done that this season.

For all his offensive wizardry, Thomas credited Marcus Smart's defense with turning around Friday's game. The Lakers came out hot, scoring 21 points over 5:38. Smart subbed in soon after and filled up his stat line, which included five steals and seven assists.

Smart literally started ripping the ball out of the hands of Lakers players and swung the momentum of the game.

"[Smart] was the key to everything," Thomas said. "For us turning that game around, he was the key. He had the most energy out of all of us. He got defensive stops."

Added Smart: "Those guys came out real hot, hitting a couple shots and feeling real good about themselves, and the whole time Brad was just preaching, 'If we give these guys a rhythm, it's going to be a hard team to beat.' I just wanted to come in and stop their rhythm early."

Thomas scored 12 first-quarter points, then went quiet in the middle frames. It seemed as if Los Angeles might have taken him out of his rhythm, but then the fourth quarter arrived. And it didn't take long before Thomas was pointing at his wrist, reminding everyone what time it was.