Isaiah Thomas after pushing Celtics past Cavs: 'Nobody holds me in check'
5yChris Forsberg
What the next CBA could mean for disgruntled players wanting off NBA teams
2dNBA Insiders
NBA to tip off season with opening night rivalries
3dTim Bontemps
Rivalries, returns and rookies: The NBA games you can't miss for 2022-23
Los Angeles Lakers
2d
NBA 'all-in' tiers: Who is focused on the present, the future or is stuck in between?
Brooklyn Nets
3dTim Bontemps and Kevin Pelton
5-on-5: Why we can't wait for NBA on Christmas Day
Boston Celtics
4dNBA Insiders
Report: Griz to play Warriors in Christmas debut
5d
NBA to retire Russell's No. 6 for all 30 teams
8dAndrew Lopez
Celts given top win total with Suns on their heels
10dDoug Kezirian
Back-to-back for the Warriors? A Clippers breakthrough? Projections for conference and NBA champs
10d
NBA Summer Forecast: Win-loss records for the Celtics, Nets, Bucks and every East team
12dNBA Insiders
NBA offseason grades: Which East teams still have work to do?
15dKevin Pelton
Remembering Bill Russell's legacy: NBA ambassador, defensive force and leader of the Bay Area's original dynasty
18dNBA Insiders
Mar 2, 2017

BOSTON -- Although maybe not as loud a performance, at least not by his lofty, King in the Fourth standards, Boston Celtics point guard Isaiah Thomas made a series of key, late-game plays Wednesday night against the Cleveland Cavaliers. When a reporter asked Thomas what Cleveland did to keep him in check, a ruffled Thomas interrupted the question for a clarification.

"Nobody holds me in check," Thomas said after his 31-point, five-assist effort in a 103-99 triumph over the Eastern Conference-leading Cavaliers at a rollicking TD Garden.

WEDNESDAY NIGHT IN THE NBA 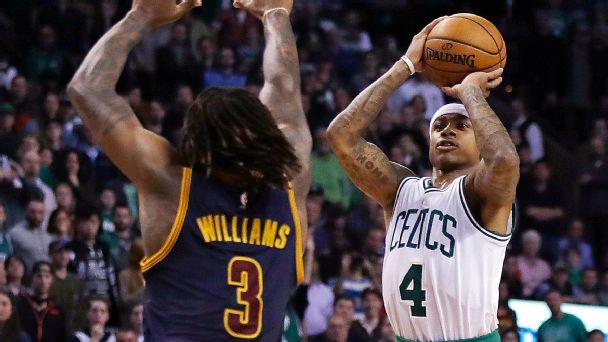 Isaiah Thomas led the way but got help as the Celtics held off the Cavs for a big win in Boston.

• Thomas: 'Nobody holds me in check'
• Cavs excited about lineup experiments
• Clutch Kawhi having epic Spurs season
• It's easy to become numb to Rockets' 3s

Thomas -- on pace to set an NBA record by averaging 10.3 points per game in the fourth quarter, the best mark since the league's by-quarter tracking began 20 years ago -- did have a relatively quiet start to the final frame. He missed three shots, missed three free throws and turned the ball over on an offensive foul.

But over the final three minutes of play, all the 5-foot-9 Thomas did was block the shot of 6-foot-10 Tristan Thompson, assist on a pair of 3-pointers during a tantalizing back-and-forth battle and score five points in the final 49 seconds -- including the winning free throws -- as the Celtics emerged with a much-needed victory over the defending champs.

"I made plays," Thomas said. "They doubled me, I passed it to Jae [Crowder], he hit a shot. I passed to Avery [Bradley]. I believe in my teammates. Then I hit a 3-pointer where they miscommunicated on their coverage. But my job, every day, no matter what the defense throws at me, is to make plays, score the ball, and I try to do that to the best of my ability."

In typical Thomas fashion, he seemed to revel in the big stage and the chance to step up in a game that featured 24 lead changes, including 10 in the final frame. With good friend Floyd Mayweather at one end of the floor and New England Patriots coach Bill Belichick at the other, Thomas savored the playoff-like atmosphere.

Fortunately for the Celtics, Thomas' teammates were eager to step up as well. There have been times this season when the Celtics seemed to be waiting for Thomas to rescue them in the fourth quarter. But when the Cavaliers sent extra bodies at Thomas, Boston got increased output from the rest of the players on the floor.

That includes Al Horford, who flirted with a triple-double (9 points, 10 rebounds, 10 assists) while doing all the little things that helped Boston stick close throughout the night. It also includes Crowder, who, after shooting a mere 36.6 percent in the month of February, stepped up with a couple of fourth-quarter 3-pointers. Meanwhile, Bradley, who, despite still being on a minutes restriction after missing nearly two full months due to an Achilles strain, did all he could to force Cavaliers guard Kyrie Irving to miss a turnaround jumper with 14 seconds to play in a two-point game.

"That’s Avery," Horford said. "That was really big, to be able to mentally stay in the game. That’s not the easiest thing to do. But him coming in and defending the way that he did and hit that big shot speaks a lot."

Bradley was near his minutes limit when he checked back in for the final 3 minutes, 28 seconds. After playing Bradley just 15 first-half minutes in his return in Monday's loss to the Hawks, Celtics coach Brad Stevens made sure to leave open the possibility of bringing him back in a key spot.

"That's what I play this game for: to go up against the best players," Bradley said. "I know I haven't been out there in a while, but hopefully I can still be mentioned for first-team all-defense. It's something I take pride in. Every single chance I get, I love going up against the Kyries, the Russell Westbrooks, all of those guys."

Added Thomas: "That’s what [Bradley] does. ... What is he, first-team all-defense? For a reason: He’s the best on-ball defender in the NBA."

Thomas has proven himself to be one of the elite scorers in the league this season, muscling his way into the MVP conversation with his fourth-quarter heroics. Wednesday's performance wasn't quite on the level of some of his finer final-frame antics, but the magnitude of the opponent made it more special. The Celtics, who had lost three of their previous four, including games to potential East playoff foes Chicago, Atlanta and Toronto, bounced back against the best team in the conference.

"I just try to embrace the moment," Thomas said. "I was missing free throws for some reason today, but my job is to have a short memory, whether good or bad, and turn the page, and I tried to do that to the best of my ability today in the fourth quarter."

"It says a lot about the direction we’re going in," he added. "There’s been games where we had leads and didn’t execute and we’ll lose the game, and tonight was a stepping-stone for us, especially against a really good team like Cleveland."