BOSTON -- For the better part of three quarters Wednesday night, the Boston Celtics had done little to deter LeBron James from getting to the spots he desired to get to. Now, rookie Jaylen Brown was getting an opportunity to see what he could do in isolation.

As James stood with the ball and 6 seconds on the shot clock, Brown creeped up on him at the 3-point line, then denied his initial attempt to drive left. James reversed direction and started right, only for Brown to shuffle back and impede his path again. James eventually cleared a little room for himself with help from his left forearm, went behind his back with his dribble and launched a step-back 3-pointer that rimmed out.

A stop against James. A rarity on this night.

In a Game 1 that the Cleveland Cavaliers thoroughly dominated, Celtics fans were left clinging to brief glimpses of hope such as Brown's defensive effort. James scored 38 points on only 24 shots, repeatedly battering Boston inside the paint, while the Cavaliers emerged with a 117-104 triumph that wasn't as close as the score might suggest.

As Celtics coach Brad Stevens and veterans like Jae Crowder sat at the podium postgame and admitted they had few answers on how to slow down James, Brown stood in the Celtics' locker room, sweat still dripping from his brow, and suggested he would not be intimidated by the challenge of guarding the NBA's best player.

"He laces his shoes up like I lace mine up," Brown said. "Coming out, playing basketball and trying to make it tough for him -- I feel that’s my job."

A follow-up question wondered if Brown truly is not intimidated by any opponent.

Based on what we saw in Game 1, it's fair to assume there's still a sizable gap between where the Celtics currently stand and where the engaged defending-champ Cavaliers reside. Boston produced a thrilling Game 7 victory over the Washington Wizards on Monday, then emerged with the No. 1 pick in the 2017 draft on Tuesday, but Wednesday brought delirious Celtics fans back to earth a bit.

Brown provided a small silver lining as he finished with 10 points on 5-of-7 shooting with nine rebounds in 20 minutes. He was one of the few Boston players to finish in the positive for plus/minus on the night (plus-4). After the game, Al Horford wondered out loud if Brown could see more minutes moving forward in this series. 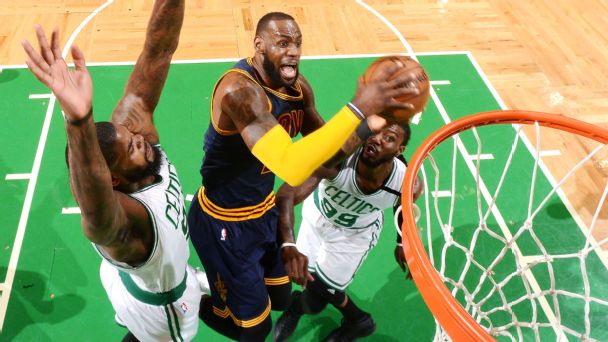 After LeBron James did as he pleased in Game 1 of the East finals, the Celtics reconsider tactics.

• Boston might double team LeBron
• Cavaliers shut down C's in Boston
• Should Celtics keep No. 1 pick or not?

Apprised of Horford's comments, Brown said he'd be ready for anything.

"That’s out of my hands. I can just be ready," Brown said. "If Coach tells me, I’m going to be ready to guard whoever. If it’s the water boy, I’m guarding him, too. It doesn’t matter to me."

Here’s why Brown’s inspired play matters even beyond this series: Half a year ago, Brown was still a teenager, a 19-year-old whose somewhat underwhelming lone season at Cal left some people leery about how his play would translate to the NBA level.

Brown, the No. 3 selection in the 2016 draft, found himself in an odd position for such a high pick because his playing time fluctuated due to Boston's primary goal being to win games. So as other NBA teams gave lottery picks ample playing time in hopes of accelerating their development, Brown endured quick hooks after defensive miscues, and there were stretches of the season when he did not log consistent minutes.

Unfazed, Brown stayed ready for whenever he was called upon. Multiple times during these playoffs, Stevens has leaned on Brown in key spots, and he has responded with poised play that's unusual for a 20-year-old rookie.

Brown gushed last week about how being a rookie on a playoff team has been far more beneficial than getting additional playing time on a non-contender.

Before Game 1 against the Cavs, while reveling in Boston's pingpong ball victory at the draft lottery, Stevens agreed that this playoff experience is helpful for the Celtics' youngest players.

"So we're really lucky to be in this position because we've got a really good group of players that -- I want to say older. We're not old, we're young in comparison to a lot of our competition. But I think one of the things that's been really good is that Jaylen has played because he adds value to winning. I think that that is something that you have to earn. It's been a great situation for us to see his growth, and it's been pretty evident."

Seeing Brown's potential on this stage, it's fair to wonder if patience is Boston's best path forward. Why not let James continue to age while nurturing a young core that might someday be the foundation of your team?

The Celtics are in a unique position where they can be competitive while building toward that future. But as some wonder whether Boston would be better off trading this year's No. 1 pick for instant talent, the more intriguing path might just be using that selection on a player such as Markelle Fultz and seeing if he can blossom alongside Brown.

Boston has easy access to players who might eventually be stars and whose low cap numbers will allow the team to build around their current roster.

The Celtics likely will be more competitive against the Cavs moving forward than they were Wednesday night. But a gap still exists, and it's hard to say if the addition of Jimmy Butler or Paul George would put the Celtics over the top. And, even if it did, it might create only a small window of opportunity for the Celtics.

In remaining patient, the Celtics have the potential to build a sustainable contender. And when the LeBron James cyborg finally starts to break down, Boston's core could just be hitting its prime.

That might be Boston's best chance to eventually emerge as a Cleveland-like power in the East.