On the heels of the Celtics' four-game sweep of the Knicks in an Eastern Conference quarterfinal series, we examine specific areas of Boston's postseason play and how it might affect the team moving forward. In the third installment of Series Takeaways, we break down Boston's rebounding efforts: 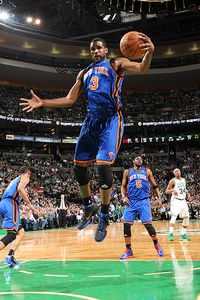 The Celtics understood they needed to do a better job on the boards as the series shifted to New York, and they made good on their word. According to Basketball-Reference, the Celtics' defensive rebound rate in Game 1 was just 69 percent, and in Game 2, it was a miserable 58.3. But in Games 3 and 4, the Celtics rebounded, literally and figuratively. They posted a defensive rebound rate of 71 in Game 3 and a more impressive 77.2 in Game 4. (Accordingly, the Knicks' offensive rebound rate was significantly lower in both games compared to the opening two games in Boston, ultimately bottoming out at 22.8 in Game 4, although they did still manage to score 18 second-chance points).

"[Rebounding is] huge for us," said Celtics captain Paul Pierce after Game 4. "We haven't been a great rebounding team all year long, but when we do rebound and we play defense the way we play, we're a tough team to beat.

Rebounding will be an important point of emphasis for the Celtics for the remainder of the playoffs, and it will have to be a total team effort on the glass until (and even when) Shaquille O'Neal returns. Besides Kevin Garnett and, occasionally Rajon Rondo, the Celtics don't have many credible rebounding threats. The respective regular-season defensive rebound rates of Glen Davis, Nenad Krstic, Jeff Green, and Jermaine O'Neal were all below league average for their positions, and Paul Pierce will be expending a hefty amount of energy scoring points and trying to defend the opponent's best perimeter player.

Things won't get any easier for the Celtics in this department moving forward. It's looking like the Miami Heat will advance to the second round to face Boston, and while it might be a below average offensive rebounding team, it's still better than New York (Miami finished the regular season ranked 19th in offensive rebound rate, according to HoopData).

If the Celtics and Heat do meet, it will be absolutely critical for Boston to take care of the defensive glass and not allow Miami extra looks at the basket. Dwyane Wade, LeBron James and Co. will be difficult enough to deal with on one possession, never mind two or three in a row. If the C's can force Miami to be a one-and-done team and take that extra pressure off of their defense, they'll have a much better chance of advancing to the Eastern Conference finals.