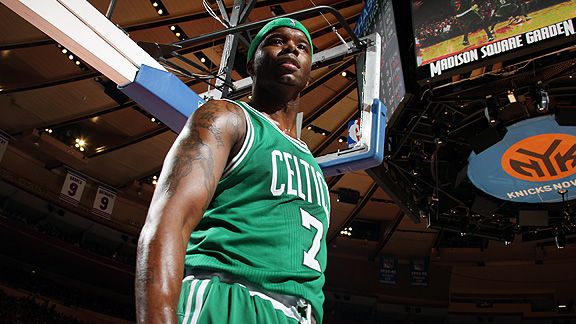 Celtics center Jermaine O'Neal during last year's playoffs.WALTHAM, Mass. -- Jermaine O’Neal took a few minutes to chat with reporters here at the Sports Authority Training Center at HealthPoint on Thursday evening and, once he got going, the big fella had a lot to say. Here are some quick hits from a conversation that touched on his health, a grueling offseason training regimen, his expectations for this season, the Rajon Rondo trade rumors, and how the Celtics’ only center is feeling on the eve of training camp:

O'Neal on his health: O’Neal made it clear that any lingering aches and pains from his injury-plagued 2010-2011 season are a thing of the past. “Physically I couldn’t feel any better than I feel right now,” he said.

“When I came back [in last year’s playoffs] I had some back spasms, but my knee felt pain-free. I wanted to really challenge myself this summer to see just how much my body could take. I felt like I did that. I wanted to get as strong as possible, as fit as possible, and I put in a lot of time. To be honest, I really didn’t take much time off at all.”

As for a wrist injury suffered in the postseason, O’Neal said he decided against surgery on his fractured left wrist because the long recovery process would have likely been career-ending.

“I’d have been done [if I’d had the surgery],” he said. “I wouldn’t have played, because it would have taken six months to recover. That means no training, no strength training, almost no shooting. So it was something that, when I spoke to the doctor, I said I’ll get it done when I’m done playing.

On offseason training: O’Neal worked out all over the place during the offseason -- in Houston (with Tracy McGrady), in Chicago, in Vegas and L.A., and even in China while there on business.

“Whether it’s this year or next year, I don’t want to limp out of basketball," he said. "At the end of the day we’re all men and we have to look in that mirror every morning and you ask yourself, ‘Did I leave the way I want? Did I do everything I possibly could do to position myself to leave the way I want?’ And only you can answer that.

“I really wanted to focus on my legs, and get the legs strong, get the quads strong so I can control the knee. So we’ll see. I think right now, at the end of the day, when I look in that mirror, I know that I did everything I can do.”

On the lack of other bigs on the Celtics roster: "You can only control what you can control... [Celtics president of basketball operations Danny Ainge is] always pretty good with making moves. He saw the schedule just like we all saw the schedule, so I’m sure he’s working whatever he needs to work. But we’ll see tomorrow what we have here. You want to position yourself, just in case. And I don’t worry about it. If you worry about being hurt and those kinds of things, it’s going to happen over and over again, I know that.”

On the start of training camp: “Obviously there’s nothing like training camp… Even in pickup games, you’re not necessarily banging bodies, you know, you’re not really going full tilt," he said. "But when the season comes, you’re full tilt. The bodies and the banging is at another level. So we’ll see how guys hold up. It’s going to be difficult. Look at the NFL -- they had a lot of injuries real quick. But the problem is, with ours, if we have injuries we might miss a significant amount of games because it’s every other day it seems like. So I think guys are probably a little bit shocked about the schedule.”

On the Rondo trade rumors: “Everybody tends to deal with that differently," he said. "I’m sure Doc and Danny have talked to Rondo about that. You can look at it two ways: [On one hand], people want you. People are calling. You never know. It may be the other team putting it out there … Who knows?

“This is a business. And more than anything, I think every player has a great perspective on this business now, from the negotiation process [during the lockout]. And if they didn’t do their job to understand it, there’s something wrong with them because it’s more evident than ever that this business has changed.”

On being back in Boston and chasing a title: “I think that’s the only thing that keeps bringing me back -– I haven’t played in a Finals game. Everything else I’ve been able to enjoy, but a Finals game is something that I desperately want to do … I want to feel that environment. I know how those conference finals are. It’s unbelievable. You smell it from the parking lot. The intensity is so major that you just want to get there.

“I know that if I’m right I can really help the team. And I know that Doc was in a tough position last year, and I was almost no help on the offensive end last year. And that’s what I want to do. I want to dominate on the defensive end and give Doc an opportunity, when Kevin gets tired in that low post, to throw it to me and help this team out.”