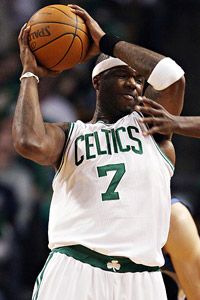 Has Jermaine O'Neal played his last game for the Celtics?WALTHAM, Mass. -- As rumors swirl of a potential deal that would bring free agent power forward David West to Boston, Jermaine O’Neal -- one of the potential pieces going the other direction in a sign-and-trade deal with New Orleans -- said after Saturday’s practice at the Celtics Training Center at HealthPoint that he’s taking all the chatter in stride.

“This is a business,” O’Neal said. “I feel the same way I did when I commented about [rumors surrounding Rajon] Rondo the other day -- this is a business. We understand the position that [Celtics’ president of basketball operations Danny Ainge and the front office] are in. They’ll talk about anybody. If they have a chance to make the team better, in their opinion, they’ll make a trade. So you can’t control this type of thing. You just show up, come to work and focus on that.”

O’Neal said that he’d talked with Ainge and head coach Doc Rivers about a potential trade and that both had been up front with him.

“We’ve had conversations,” O’Neal said. “You know, I’ve been around too long not to understand. Some guys get bitter about it, but this is a business.”

If he does get dealt, O’Neal stressed that he wants to end up on a winning team. If he doesn’t, he said he’ll retire.

“There are really only three scenarios [in play],” O’Neal said. “Either I stay here, I go to another contender, or I stop playing … If I go somewhere else, it won’t be to a losing team.”

The Hornets, who are in the process of potentially trading away superstar guard Chris Paul, finished as the seventh seed in the Western Conference last season. It's unlikely O'Neal would be eager to play there, especially in a situation where the current stars are being traded away. O’Neal said he doubts that a young team like the Hornets would want him in a deal, and that if a trade were to be finalized, there’s a good chance a third team would have to be involved.

“I’m sure if there was a deal, it obviously wouldn’t be just among us, there would be a third team,” he said. “My stop wouldn’t be New Orleans. They’re not trying to get older. They’re trying to clear up cap space and things like that. At this point in my career, I don’t think any young team or any team that’s trying to get under the cap would trade for me. It’s more about clearing cap space.”

Before heading out on Saturday, O’Neal said that regardless of the rumors, as long as he’s in Boston, he plans on showing up for practice.

“I still have a responsibility,” he said. “This is my job. This is my job and I owe it to my teammates, I owe it to the people here as a Celtic right now. Everybody handles situations differently. For me, it’s more about doing what I get paid to do -- show up, practice, get better, get more comfortable with the guys, get more comfortable with the situation. I’m just worried about right now. That’s all I can worry about. If I’m worried about what’s going to happen tomorrow or later in the day, then I can’t focus on what’s going on here. There’s too much happening right now for me to be standing around worrying about if I’m going to be here tomorrow or not.