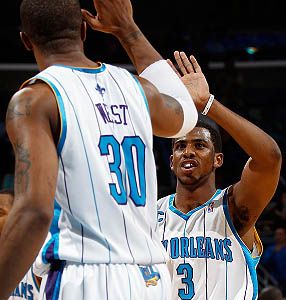 The Los Angeles Lakers have pulled out of the three-team deal with New Orleans and Houston that would have landed Chris Paul in L.A., according to sources close to the talks.

The reason for the Lakers' withdrawal was not immediately known. The Hornets, Rockets and Lakers had been working for the past 48 hours to complete a reconfigured version of the trade that the teams struck Thursday that had been vetoed by NBA commissioner David Stern.

The Hornets, according to sources, will now redouble their efforts to trade Paul elsewhere. Paul can become a free agent at season's end. One source close to the process told ESPN.com after the Lakers' withdrawal that the Clippers have emerged as an "early front-runner" to trade for the All-Star point guard. The Lakers are now expected to turn their full focus to obtaining Dwight Howard, who has asked the Orlando Magic to trade him.

So what's the trickle-down effect for the Celtics? Well, there's a number of things to consider:

* Will West still head East?: All indications are the Celtics' attempt to land free agent forward David West in a sign-and-trade deal with the Hornets was being delayed by the three-way deal involving Paul. It's not immediately clear what impact this development will have on the potential West deal, but coach Doc Rivers is eager to get his full squad in camp with the season a mere two weeks away. Any further delay won't thrill him.

* Could the Celtics jump back in on Paul?: Just when Rajon Rondo thought he could focus on the upcoming Celtics' season, rumors will only naturally jump back up after the Lakers backed out. That said, the early indications are that the Clippers might make a stronger push for Paul now that their Staples Center brethren are reportedly turning their attention to Howard.

* How L.A. moves could impact Boston: If the Lakers lure Howard to the Western Conference, that's a victory for the Celtics, who wouldn't have to really worry about facing the league's best big man until the NBA Finals (what's more, it prevents the Nets, one of Howard's other potential suitors, from adding another impact player). If the Clippers end up securing Paul, then their first-round pick in the 2012 draft -- obtained by Boston through the Kendrick Perkins deal with Oklahoma City last season -- could dip in value with the expectation that the Clippers would be instantly more competitive in the West. (Then again, that pick is top 10 protected, so it wasn't going to be overly glamorous anyhow).

* C's have limited trade bait: One thing to keep in mind moving forward is that Boston no longer has two key sign-and-trade assets in Glen Davis and Jeff Green. Davis got shipped to Orlando in a deal that -- when finally consummated -- will bring Brandon Bass to Boston. By officially signing Green to a one-year, $9 million deal Saturday, the Celtics cannot immediately trade him away (all signings require a certain -- and often lengthy -- amount of time to pass before that player can be utilized in a trade). The team's rookies, who were in the process of finalizing their deals in recent days, would seemingly be in the same boat once they're officially inked. That leaves just the six signed players that the Celtics emerged from the lockout with as potential trade bait (the playoff starting 5 of Rondo, Jermaine O'Neal, Kevin Garnett, Paul Pierce, and Ray Allen, and second-year guard Avery Bradley).