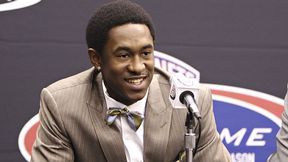 The Nets traded the rights to the No. 27 pick (JaJuan Johnson) and a 2014 second-round pick to Boston in exchange for the No. 25 pick (Brooks). Brooks is in Boston Wednesday night and will start for New Jersey as the two teams meet in an Atlantic Division clash.

Rivers couldn't remember where the Celtics had Brooks on their draft board, but spoke highly of his play thus far.

"On film, he’s an aggressive scorer," said Rivers. "WIth guys out, he’s going to be even more so -- and they are probably going to lean on him more to do that. But he’s gifted. He can score the ball. So he’ll be a guy that, obviously, our defense will have to focus on."

Brooks, a Providence College product, admitted before Wednesday's game to being a bit nervous for his first start.

"You know I am -- I'm nervous. I'm very nervous, but I'm well-prepared," he said. "I've been playing for so damn long. This is another game of basketball at the end of the day. Just got to go out there and play hard."

As for going up against the Celtics and any extra motivation going against the team that traded him, Brooks likewise downplayed the situation.