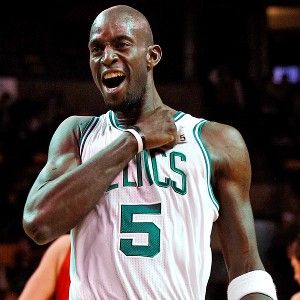 Kevin Garnett provided an entertaining breakdown of Wednesday's win over the Nets.BOSTON -- The Celtics' locker room had practically emptied out when Kevin Garnett emerged to chat with reporters after Wednesday's win over the New Jersey Nets. But there's a reason reporters are willing to hang around an extra half hour to hear from the 17-year veteran -- he rarely disappoints with his candid answers. Here's a mere sampling of his postgame confab with the media:

Was this Boston's most complete defensive effort of the season?

[Garnett and media relations czar Jeff Twiss make cringing motion] "If Twiss says 'Uhh,' then uhh. I can definitely say from a rhythm standpoint -- we're working at this. [Thursday] will be a work day. It'll be good to get in the gym and have some practice time. If we have to compare games and everything, yeah, I would say this would probably be the most complete defensive game we've put together for 48 minutes. Doc read the stats off to us, with them having 12 points or certain shots, and the Providence kid [MarShon Brooks] came in and had a real, real good first half. We got him under control, and that's what we are. We're a defensive team at the end of the day."

What's his role on this year's team?

What did Avery Bradley bring to the floor Wednesday night?

"You know, what I think you're seeing is some opportunities for young guys. It started with Greg [Stiemsma] and now Avery's having a chance to play, having some opportunities to play, and he's taking advantage of them. I don't root for young guys a lot because they're hard-headed and don't like to listen. We've got a good group of guys here, and that includes our young guys. They're a young group, full of enthusiasm, full of hope and promise and a lot of potential. But they're good guys and they're working really, really hard, which you want. You want what you see. They're getting the opportunity to go out and play and it's all about what they're doing with the opportunities, so I'm glad to see those guys actually prosper from the opportunity. We keep a foot in their [butts], but they work really hard."

On Bradley's inspired defensive play versus the Nets

"He came in like a bloodhound, man. He was nose over the ball and he brought a different dimension to the game tonight. I thought he, coming off the bench, with Keyon [Dooling] starting [in place of Ray Allen] and him coming in, just the way he picked up the ball full court, he was on their guards from the jump. From the minute he came in the game, from the time the horn went off, I thought he was a big, big, big component of the game, and he definitely was a factor. Definitely was a factor. So it's good to see Avery have a game like that."

Has Brandon Bass been effective since joining the team?

"Brandon's efficient. He knows his game, he doesn't come out of that. He's playing with a group of guys who are rooting for him. I don't think he's ever been rooted for like this. We sort of parade each other. We praise each other, but at the same time, we push each other and he's no different from that. He's fallen right into being a Celtic."