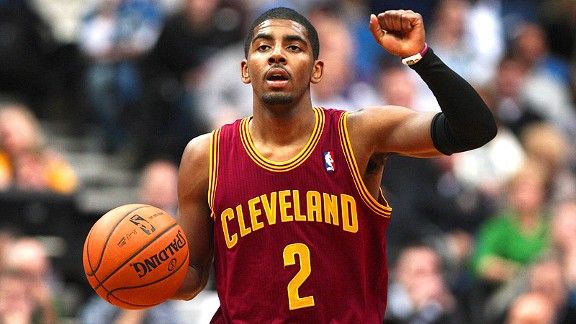 Cleveland point guard Kyrie Irving showed why he was the No. 1 pick in last year's draft.BOSTON -- A collection of postgame news and notes after the Cleveland Cavaliers defeated the Boston Celtics 88-87 Sunday evening at TD Garden:

RIVERS ON IRVING: 'HE'S GOING TO BE A STAR'

Long before Kyrie Irving produced the final of his game-high 23 points Sunday night off a driving layup with 2.6 seconds remaining to lift the Cavaliers to victory, Celtics coach Doc Rivers knew he was going to be something special. And, sure, Rivers is a bit of a biased observer, but he really likes what he sees in the No. 1 overall pick in last summer's draft.

"He’s terrific," Rivers gushed, while detailing how he got to spend a week observing Irving during the summer of 2010 at the FIBA Under-18 Championships, where he played alongside Rivers' son, Austin, comprising the team's gold-medal backcourt.

"He’s going to be better than a good player, he’s going to be a star. I think he has a shot at that. He’s just powerful, I think that’s what people miss. They see this guard, but they don’t see power. He’s a powerful little guard with great handle, and he’s going to be good."

The fact that Irving has a Duke pedigree doesn't hurt, either. If he hadn't declared for the draft after his freshman season, Irving might have shared a backcourt with Rivers' son again this winter.

"No, I'm happy for him," Rivers said before Irving efficiently connected on 10-of-14 shots while chipping in six assists, four rebounds and a steal over 33:29. "I’m happy because he’s where he should be right now, that’s for sure."

Rivers utilized the Celtics' offday Saturday to jet down to Durham, N.C. to watch Duke's win over St. John's at Cameron Indoor Stadium.

"Oh, it’s always great [to get to Duke games]," Rivers said. "I could go to games there everyday. That place is just a unique place to watch basketball, it really is. It’s a special place, whether your son -- obviously, that makes it better -- but even if he wasn’t [playing], it would be a place that I wouldn’t mind going and sitting -- besides the seats, [they are] tough for my body. Other than that, it’s a terrific venue."

One thing Rivers could do without is the constant face time he gets during Duke's national broadcasts, the cameras often cutting to him whenever his son has a noteworthy moment -- both good and bad. Rivers said he's tries to limit the emotion he shows, knowing it's very likely people are watching -- and overanalyzing -- his reactions.

"I wish they’d stop that, I can tell you that," Rivers said. "I get more comments about that. One day they’re going to see me saying, 'What the [expletive]!?' I hope that never happens. But that’s the explanation for the poker face. Inside, there are things going on, I can tell you that."

Cavaliers reserve center Semih Erden said he was excited to be back in Boston for Sunday's game against his former team and it wasn't hard to see how much the time he spent here at the start of his NBA career meant to the 25-year-old Turkey native.

"I miss Boston, it’s good to be here," Erden said.

Drafted with the final pick in the 2008 draft, Erden joined the Celtics last season and appeared in 37 games, averaging 4.1 points and 2.9 rebounds over 14.4 minutes per game. He made seven spot starts while the O'Neals -- Shaquille and Jermaine -- battled injuries, even while Erden played through shoulder and groin injuries of his own.

Erden and Luke Harangody were shipped to Cleveland at the trade deadline in exchange for a 2013 second-round draft pick, freeing roster space for the Celtics to add Troy Murphy and Carlos Arroyo (moves that did little to improve the team). Erden played in only four games with Cleveland before being shut down for the season because of his injuries.

Erden hasn't been able to carve out a consistent role with the Cavaliers this season, averaging 3.4 points and 2.1 rebounds over 11.9 minutes in eight appearances. He didn't get off the bench for Sunday's game, but that didn't ruin his trip. He invaded Boston's locker room almost immediately after the Cleveland bus arrived at the arena on Sunday.

"I was in the locker room, [Kevin Garnett] he’s amazing, and Paul Pierce, Ray Allen, Jermaine, everybody has good [words for] me ... welcome back, that stuff. They asked me how I’m doing, what’s going on in my life, how’s my shoulder. KG asked me about my family. He’s good."

* Celtics center Jermaine O'Neal said Friday he was hoping to be back on the court for Sunday's game. It didn't happen. Quite literally a game-time decision, O'Neal, battling a bone bruise on his left knee, told Rivers just before tip-off that he couldn't go. Rivers wasn't likely to play him anyhow.

"I always leave it up to [team trainer] Eddie [Lacerte] and [the player]. And both came to me. Eddie came to me before the game and said, ‘Even if he says he can play, I’m saying he shouldn't play.’ Fortunately, we didn’t have to get into that because [O'Neal] said he couldn’t play."

All indications are that O'Neal will try again Tuesday night to see if he can get back on the floor. Point guard Rajon Rondo could be back then as well. More injury info can be found in our pregame update.

* Avery Bradley turned his right ankle and missed part of the second half while having it retaped in the locker room. Bradley said after the game that he's fine.

“My ankle is good," he said. "I’m going to get treatment on it right now. I’ll be fine. I’ll be ready for Tuesday. I just came down on it wrong. But I’ll be all right."

* Byron Scott said he didn't plan to offer up any of his war stories from those Celtics-Lakers battles he was a part of in the '80s. "I think sharing with [his players] doesn’t really do any justice most of the time until you experience it," Scott said. "So my war stories from playing here, I kind of keep to myself. [Assistant] Paul Pressey and the coaching staff, they know about it, but a lot of the young guys, they don’t care about that stuff anyway."