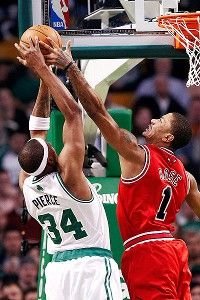 The Celtics and Bulls battle Sunday at TD Garden.The Bulls offered high praise of the Celtics in advance of Sunday's showdown at TD Garden. From our good friend Nick Friedell at ESPN Chicago:

In his own special way, Kyle Korver offered up one of the highest compliments the Boston Celtics will probably get all season.

"When I was in college, we used to play pick up games in a little league," Korver said Friday night. "And there was always like the old-guy team. They weren't really that athletic or anything, but they killed everybody because they played so smart and they backdoor cut and they set screens and they knocked down shots. The Celtics are like them, but good players. It's a compliment. They play really good team basketball. So it's going to be a challenge."

Korver and the rest of his teammates realize Sunday's game in Boston is a challenge, and it should not be taken lightly. The Bulls have knocked off the Celtics once this year at TD Garden, and they know it's going to be tough to do that again.

"They're such a veteran team. They're never out of a game," Korver said. "They're just a grind it out team. Obviously, they've got several really, really great players. And some Hall of Famers who have a lot of pride ... They do such a good job of playing off each other. It's never just one guy for them just doing the whole thing. They play such great team basketball. Just veteran guys that know how to play the game."

All of the Bulls seemed to feel the same way about the Celtics. They know this matchup means a little more than others and they know they will have no problem getting up for the game, even at the end of a long nine game road trip.

"Some games are easier to get up for than others," Bulls center Joakim Noah said. "And that's definitely one of them. You feel a certain way when you wake up. It's just easier to get out of bed for some reason."

Why? "It's the whole package," Noah continued. "I don't really know what it is. It's just a feeling that you get when you get in that building. It's the fans. It's the history. It's exciting stuff."