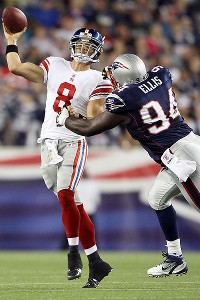 Shaun Ellis applies pressure for the Patriots during the preseason.FOXBOROUGH, Mass. – Shaun Ellis’ football journey has taken him somewhere he didn’t anticipate. After 11 seasons with the New York Jets, the veteran defensive lineman signed a one-year contract with the rival Patriots on Aug. 8.

The 34-year-old Ellis, who was born in Anderson, S.C. and is married with three children, said he’s enjoyed the change. On Friday, he shared his “football journey” with ESPNBoston.com.

When he first started playing: “I always played in the backyard, but the first time playing organized football was seventh grade, in middle school. I wasn’t going to play. They had a meeting in the cafeteria for those to sign up, and I didn’t go. I was going to walk home and the coach caught me and asked, ‘Are you not going to play football?’ I said I wasn’t planning on it. He said, ‘You’re playing.’ I was a wide receiver and backup quarterback. My middle school team (Southwood) was undefeated two years in a row.”

Memories at Westside (S.C.) High School: “I started on the varsity as a freshman, playing free safety and cornerback. I ended up on the defensive line when one of the guys got hurt, and they moved me up there. I also was returning punts and kickoffs at the time. I ended up playing defensive end/outside linebacker and I’ve been there ever since; that was 1992. At the time, I was 6-4, 215 pounds. There was one particular game that stands out. We played Dorman, a team out of Spartanburg, and they were heavily ranked. I had seven sacks and 20 tackles.”

Attending University of Tennessee: “I visited Florida, South Carolina and Clemson, but I went there on a visit and just fell in love. Just the college football environment there is top of the charts. I knew that’s where I wanted to go.”

Entering the NFL as a first-round pick of the Jets (12th overall) in 2000: “Just overall excitement. Disbelief. Reflection of how hard you worked to get to a certain point, and to ultimately reach that goal, it was overwhelming. It was great times. I had a ball there, with a lot of ups and downs. But overall, it was a tremendous opportunity.”

Biggest up & biggest down with the Jets: “I guess the biggest up was going to the AFC Championship game two years in a row [in 2009 and 2010]. The biggest down is losing those games. It went hand in hand.”

Experiencing such a contrast in Jets head coaches: “A lot of coaches have their own personalities and how they like to do things. It went from A to B, and B to Z, and you just had to take on the coach’s personality. That’s how I learned to do it. Be yourself but also take on the coach’s personality. As coaches changed, it proved even more for me that’s how you have to handle the situation.”

Signing with the Patriots this year: “It’s one of those things where you think you’ll finish where you started. Obviously, that didn’t happen. I ended up coming to be a Patriot. I had a lot of battles throughout the years with them and this organization. To actually be here now, and getting ready to suit up for a game with them, it’s still kind of weird. It’s definitely a huge opportunity for me and my family, and I’m excited to get the season started and to play with a group of guys who are great as teammates and as people. We all have the same goal in mind, to try to get to the ultimate goal. The organization is really treating me well. I couldn’t ask for anything more. Everyone works well with one another and gets along. You just understand the type of mental aspect you have to have when you come through this door.”

How tough to go from bleeding Jets green to a Patriot: “It’s just one of those where you have to move on. It’s kind of like a [personal] relationship. Once it goes bad, you just move on and try to find the next good woman. That’s what I had to do. I had to re-train my whole thinking and everything to come in and do things the Patriots’ way.”

What he likes most about football: “I just love the preparation. All the physical aspect, that comes with the territory, but just getting ready for a game in the locker room, going through your keys, your assignments, and just getting a feel mentally how the game is going to be played out. Then you get on the field, and sometimes it unfolds that way, sometimes it doesn’t. When it plays out the way you think it will play out, it’s the best feeling in the world.”

Mentors in his career: “My high school coach, Ted Luckadoo, helped me a lot. My AAU basketball coach when I was growing up, Marion Tarrant, he’s really the one that got me to be prepared for all the different coaches’ personalities. If you could deal with him, you could deal with anyone. He just had that presence and he always expected the best of you.”