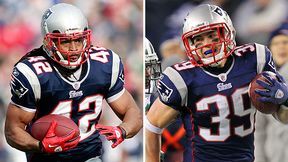 New England's top running backs -- BenJarvus Green-Ellis and Danny Woodhead -- were both undrafted before earning NFL jobs.While trimming down their roster in advance of the new season, the New England Patriots bid farewell to numerous early round draft choices, including picks from each of the first four rounds in Brandon Meriweather (1st round, 24th overall in 2007), Darius Butler (2nd round, 41st overall in 2009), Brandon Tate (3rd round, 83rd overall in 2009), and James Sanders (4th round, 133rd overall in 2005). All while the likes of undrafted Iowa linebacker Jeff Tarpinian found a way to cling to a spot on the 53-man roster.

Coach Bill Belichick said his staff tries not to set expectations based on draft status and instead lets the player's performance on the field dictate who earns a job.

"We have a saying around here, ‘It doesn’t matter how you get here, it’s what you do here,’" Belichick explained last week. "I think that’s the way we should coach the team and I think that’s what the players expect. That goes for everybody. Nobody is on a scholarship, everybody has to earn their keep. It’s a competitive situation, I think that brings out the best in everybody. [It] brings out the best in guys that are established that they’re being pushed [and] it brings out the best from guys who aren’t established, who know they have an opportunity. Competition is competition. That’s just basing on what the performance is, all that is decided on the field."

According to Elias Sports Bureau, the Patriots have the third highest total of undrafted players on their 53-man roster to start the 2011 season (and the team has three more on injured reserve). Here's a look at the top squads heading into the new season:

Most undrafted players on 53-man roster