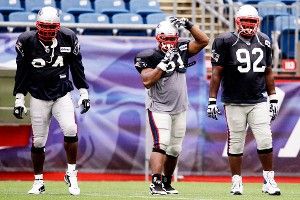 The Patriots defensive line will be in the spotlight Monday night vs. the Dolphins.Regardless of whether Albert Haynesworth (questionable due to illness) suits up for Monday's season-opener in Miami, the Patriots' pass rush will undoubtedly be in the spotlight against the Dolphins. After bringing in the likes of Haynesworth, Shaun Ellis, and Andre Carter with eyes towards adding pressure on the quarterback, it will be interesting to see if that group is able to have an immediate impact.

One area to watch is how much success the rush has when sending four or fewer rushers. According to ESPN Stats and Info, the Patriots sacked the opposing quarterbacks on a mere 3.7 percent of total dropbacks when sending four or fewer rushes last season. That was the fifth-lowest mark in the entire league. The ability to generate more pressure without sending additional bodies is key for New England.

Especially because the Patriots weren't much better when sending additional bodies last year. According to Stats and Info, the Patriots ranked 31st in the league in both opposing quarterback completion percentage (63.9 percent) and first-down percentage (43.2 percent) when sending five or more bodies at the quarterback last season. The Patriots forced just two interceptions and allowed touchdowns on 7.1 percent of those blitz plays last season (both tied for 28th worst in the league).