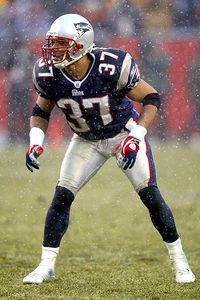 "When I was there I was never in awe of anything, because you expect greatness when you prepare, when you work hard, and when you do the things you're supposed to do. You expect to have success.

"When we stopped Peyton Manning in the playoffs, and we'd intercept him, we weren't in awe of Peyton Manning, We knew we could go out there and stop him, because that's what we prepared for. So you look at a guy like Chad Ochocinco, you know that becomes a distraction when you're tweeting and you're bringing the fans into the mix. And (head coach Bill) Belichick would always tell us, there's always something else you can do to improve this team, to improve your play -- study more, work harder, be an asset, don't be a liability.

"And when you look at Chad Ochocinco's stats, one catch for 14 yards, that's unacceptable. And when they were doing all these productive plays, you were on the bench.

"Tedy's just like me, and Willie McGinest, and all these other guys. Don't be in awe of the situation, be part of that situation. Make it better. So I think Tedy Bruschi sent a message out to that entire New England Patriot team. This is a different team, they're a younger team. So Chad Ochocinco, get with the program. He told him exactly right. And it wouldn't surprise me if Belichick even pulled him to the side.

"You can't be in awe of Tom Brady and these guys. You've seen this happen in a short training camp. You know, you've played against Brady. You played against a lot of these championship teams. Why are you in awe? It just becomes a distraction. Like Tedy said, 'Hey man, be part of the program.'"