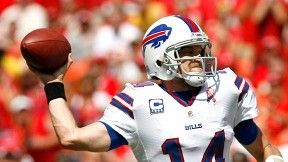 1. Insight on Ocho: Before arriving in Buffalo, Fitzpatrick spent two seasons in Cincinnati where new Patriots receiver Chad Ochocinco was one of his favorite targets (according to ESPN stats, Ochocinco and Fitzpatrick teamed up on 40 receptions for 394 yards and four touchdowns during the 2008 season). What does he think of Ocho and his acclimation in New England? "I really like Chad," said Fitzpatrick. "He’s a fun guy to have around. He’s obviously a real talented receiver. I haven’t really paid too much attention to the Patriots' offense or his role or what they’ve been doing. I know that he’s a talented guy. He’s also a dedicated guy. He’s a guy that’s going to commit himself 100 percent to what he’s doing. I’m looking forward to seeing him and saying hi on Sunday."

2. Gailey praises Patriots' offense: Gailey knows a thing or two about offenses and he heaped praise on quarterback Tom Brady and the Patriots' offense for their exploits over the first two weeks of the 2011 season. "It looks like it doesn’t matter who they play or where, they do a great job," said Gailey. "Everybody is on the same page. That’s almost the highest compliment you can give to an offense is when everybody is on the same page. Obviously it has a lot to do with Tom and the way he runs the offense. He is a great quarterback. When you look at physical talent but he is even better when you see the way he manages the game, controls the tempo and does all the little things to help his team be successful."

3. Fitzy's a Harvard guy ... who likes Pinocchio's Pizza: Fitzpatrick knows its virtually impossible for him to be referenced without a reference to Harvard. He joked, "There are worse things to be called, worse things to be known by I guess." Fitzpatrick pointed out that his wife is also a Harvard graduate and they have family near Cambridge, so they try to get back to the area at least once each year. What's the one thing he has to do while he's in town? "I’ve got to go to Pinocchio’s, the pizzeria on Harvard’s campus and order two slices of pizza and a cheeseburger sub. That is one meal, and I think I put on about 25 pounds from that one meal in college."

Bonus nugget: Asked if he's heard any buzz about the Bills after winning their first two games of the season, Gailey deadpanned, "If it doesn’t happen in my office I don’t know about it."