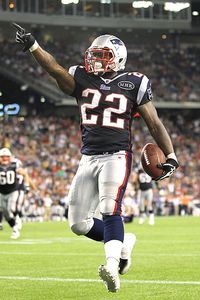 Ridley, a third-round pick (73rd overall) out of LSU, is now averaging a backs-best 6.4 yards per carry in limited trots this season. During the preseason, the 5-foot-11, 225-pound back also produced team highs with 30 carries for 148 yards. With second-round pick Shane Vereen limited by a hamstring injury during training camp, Ridley might have gained an early edge on the depth chart, rushing for a pair of scores during the exhibition season.

But the New England staff stressed Tuesday that he still has plenty of work ahead of him despite the positives he has shown on the field during game action this season.

"First of all, last week was basically the first game he had played a decent amount," said Patriots offensive coordinator Bill O'Brien. "He’s got a long way to go, just like any rookie as it relates to the overall scheme and knowing what to do. But that whole position has been good for us this year, productive. He’ll be another guy that we add into the mix there. He’s got to improve in a lot of areas and he will. He’s working hard."

Like O'Brien, Patriots personnel director Nick Caserio cautioned that Ridley, "has a long ways to go," but said the most important thing for any back is to "get positive yards and, when the ball is in your hands, make positive things happen." It's a small sample, but Ridley's done that for the Patriots thus far.

And the Patriots clearly liked what they saw from him in college.